Every Friday, Susanne at Living to Tell the Story invites us to pause for a few minutes and recount some of the blessings of the week. It’s harder some weeks than others to find them, but they are always there. And looking for them can transform our whole outlook. So here are a few from my week.

1. A park outing. We went with my son, daughter-in-law, and grandson last weekend to Norris Dam State Park for a picnic lunch and fishing. We had our little picnic area to ourselves most of the time. The few people who came and went stayed more than six feet away. Jesse and I left a little early after watching the others fish for a bit—neither of us was interested in fishing and the heat was getting to me. I can’t remember if this was Timothy’s first time to fish, but it was fun to watch him get the hang of it.

2. A potty tent. 🙂 Though the state parks are open, the restrooms are closed. Personally, I’d rather use a public a restroom and sanitize than wonder where people might have relieved themselves outdoors. A while back Jim had invested in a camping toilet and a little pop-up tent to put it in, so he brought all of that and set it up. Yes, I did feel funny using it when another family was in the area, but it was much better than finding a tree to hide behind. I don’t know if they thought it was really weird or a good idea. 🙂

3. Time off. This was something from the week before last that I forgot to mention. Everyone in my husband’s company was required to take a week of vacation in May since business was running a little slow and some of their clients were closed. Jim chose the last week in May plus a couple of Fridays before that. He got a lot done in our yard and our son’s, rearranged his office a bit, cleared some things out of the garage, and took some things we both had culled to the thrift store.

4. An actual letter! My oldest son and I used to write back and forth when he first moved out-of-state, but that eventually fell by the wayside since we FaceTime pretty regularly. So it was a nice surprise to get a letter from him.

5. An unexpected history. I’ve had this little mini cedar chest for years. 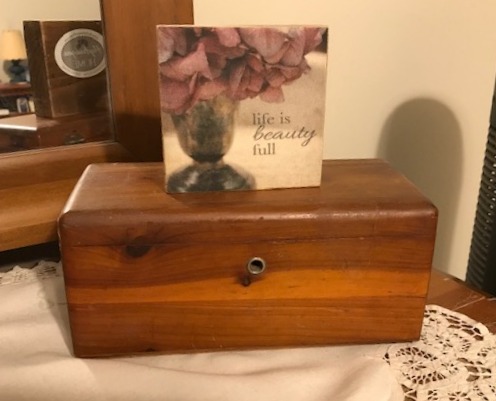 It had been my mom’s, and I kept all kinds of childhood treasures in it. Now it just has odds and ends. It never occurred to me to ask when or where she got it. Then my friend Susan had a post about these Lane chests. It turns out that for many years, the Lane company gave these out to female high school seniors who requested them. It was fun perusing this site and finding out about the history of them. They share a way to find out when a box was made by its dimensions and inscription (which I have not done yet).

It was so fun to discover that this little box that I have used for decades had such a history!

That was my week. How was yours?