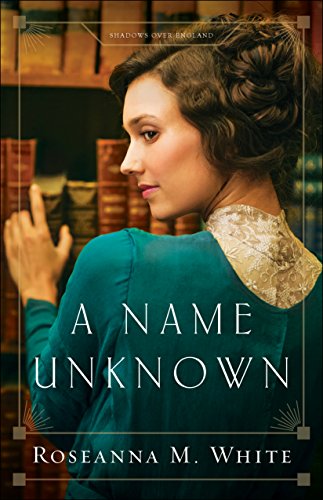 In A Name Unknown by Roseanna M. White, Rosemary Gresham’s parents died when she was eight, and she found herself on London’s streets. Eventually she and similar children formed themselves into a makeshift family with the older ones taking care of the younger the best way they knew how: stealing. Rosemary’s many years of practice have honed her skill into an art, taking her from pickpocketing to mixing with and stealing from society’s upper echelons.

A mysterious Mr. V. asks Rosemary to do a job with the biggest payoff she’s ever seen: gain access to a Peter Holstein, a “rich bloke” who “has the king’s ear.” Holstein’s family roots are German. War is brewing with Germany. V suspects Holstein is a traitor and wants Rosemary to find solid evidence.

Fortunately, Holstein has just advertised for a librarian to organize his stacks of books and family papers, and Rosemary applies for the job.

Peter Holstein is aware that trouble is brewing over his name and associations. He is not in public much due to a stutter, but his absence is taken for aloofness. He has secrets of his own, but they don’t include espionage: he’s a best-selling author writing under a pseudonym. He prays God will guide him. Rosemary seems the answer to his prayers: hopefully she can help him find family journals and documents which will prove them loyal British subjects.

I loved this book on many levels: the intrigue of Rosemary’s search and whether she’ll be found out; her prejudices about “rich blokes” being upended by what she sees in Peter; Peter’s frequent lapses into the work he’s writing and decisions over his plot; his awkwardness and trouble expressing himself orally; his efforts to live out his faith; her constant chatter and his need for quiet.

This is the first book in a Shadows Over England series, and I immediately bought the second book after finishing this one.