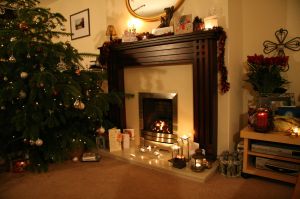 (Photo courtesy of the stock.xchng.)

Most of us have a vision in our minds of the perfect Christmas: family gathered around, a clean and sparkling house, a beautifully adorned Christmas tree with piles of lovingly chosen presents underneath, a feast for the eyes and the table, scents of roasting turkey or ham, pumpkin pies, apple cider, everyone marvelously getting along like the end of a made-for-TV movie.

But what if that’s not reality this year?

What if one member is in prison? Or overseas or across the country? Or in heaven?

What if a lost job or a major medical expense has led to a depleted bank account and bare cupboards?

Is Christmas then ruined?

Let’s go back to that first Christmas.

Mary and Joseph were alone and away from home and family in a strange city. They did not have a beautifully decorated house: they did not even have a hotel room. The only place someone had available for them was a stable. The only scents of the season were those of animals in a barn. Mary, as a young, first-time mother, did not have the blessing of a modern hospital and sanitary conditions, a skilled nursing staff and childbirth training. Giving birth was painful and messy. Joseph would have been out of his element helping a woman deliver a baby, and perhaps he was dismayed or frustrated that he could not provide better for her in general, but especially in her moment of need. And after the blessed relief of a healthy child safely born, there was little acknowledgment of who this Child was besides the shepherds, Simeon and Anna, and, later on, the wise men. Soon they would face the danger of a king bent on killing the Child in their care and the loss of reputation Mary would endure her whole life as many thought her Child was illegitimate, and soon the ominous promise that a sword would pierce through Mary’s own soul.

What did they have then, that lonely, uncomfortable, smelly night? They had the Child of promise. A Child whom they were told to name Jesus, which means “Jehovah saves,” whose very name is a promise, who would reconcile them to God by taking care of their greatest need, who would “save His people from their sins.” They had the realization that, as the angel told Mary when first delivering the news that she would bear a child though she was a virgin, this Child was the long-awaited and longed-for Messiah, the King, the Son of the Highest. What cause for joy and wonder! They had no idea how it would all work out. But they had the promise, and because of the promise, they had hope.

It’s certainly not wrong to enjoy a decorated tree, presents, wonderful food, and family gathered. But we can celebrate Christmas even all of those elements are missing or less than ideal…because we can celebrate in our own hearts and with those around us that same promise, that same hope. If that’s all we have this Christmas…that’s more than enough.

(Sharing at Inspire me Monday)

19 thoughts on “A Perfect Christmas”