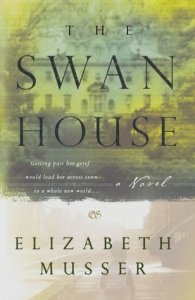 I picked up The Swan House by Elizabeth Musser when it came through as a Kindle deal because I liked her Words Unspoken so much (in fact, it was one of my top ten books from 2010.)

This story is told from the vantage point of 16-year-old Mary Swan Middleton, daughter of a wealthy Atlanta family in the 1960s. Tragedy strikes early in the book as her mother dies in an airplane accident along with a number of other Atlantans. The accident wounds her family and community deeply.

There are a number of threads in this book which Elizabeth weaves together nicely:

– Mary’s family and community dealing with their grief

– Mary’s (or Swan, as she’s called most often, or Swannee) quest to determine what happened to some missing paintings, one of them her mother’s, which were lost before they were to be debuted at the High Museum of Art

– Her black maid, Ella Mae, inviting her to come to her church to help with the weekly food distribution to the needy as a way to take her mind off her grief, where her eyes are opened to a whole different world and where she meets Miss Abigail, a white lady who has made it her mission to live and minister in the area.

– Her getting to know and becoming interested in a black teenage boy named Carl.

– Mary’s discovering clues that what was thought to be her mother’s artistic temperament might have been something deeper, something worse.

In a sense it’s a coming-of-age story, but it’s so much more than that. It’s a book of rich depths. One of its themes is that there is often more going on behind the surface of a person’s life that we’re aware of.

Some of my favorite quotes from the book:

We were transported by that music in a ethereal way that later we would try to explain and couldn’t. But it was the first time I really felt what I had long understood: that something could be extremely beautiful and intensely painful at the same time.

She thought every church should be…a place where you could go without no makeup or fancy dress to hide behind and you could jus’ hug yore friends and cry and tell the Lawd how bad you’d messed up and ask Him to forgive ya and let ya git up and keep goin’.

Guess I ain’t got no business tellin’ the good Lawd that He put me in the wrong place. He done shown me ’nuff times that He knows exactly what He is doing.

I mentioned in Why Read Christian Fiction that you would expect to find Christian conversations in Christian fiction but that some authors make it more subtle or only mention Christian truths in an offhand way so as not to be accused of being too heavy-handed with it. While some stories would call for subtlety, I am glad Elizabeth felt the freedom to have her characters have full-fledged conversations about what it means to really be a Christian and how Christianity should impact a life.

Elizabeth is a native Atlantan, and I enjoyed her afterword where she explained that many points of the story came from real life (even the airplane crash was a real one that impacted the Atlanta community). We lived just outside Atlanta for four years, and even though we didn’t go into the city that much, I felt like I was not only revisiting it but getting to know it better while reading this book.

I also enjoyed reading a little more about Elizabeth after reading this book. She and her family are missionaries in France, and she writes in a refurbished tool shed. She tells some of her writing journey here and photos of her writing place are here. I was exciting to see on Goodreads that this book “was named one of Amazon’s Top Christian Books of the Year and one of Georgia’s Top Ten Novels of the Past 100 Years.”

I enjoyed Words Unspoken so much, I am not sure why I waited so long to read another of Elizabeth’s books. But now that I have, I am looking forward to reading more of them.