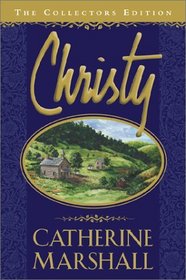 Christy by Catherine Marshall was the May selection for Carrie‘s Reading to Know Classics Book Club. I had read it decades ago and looked forward to this opportunity to revisit it.

Christy is historical fiction based on the experiences of the author’s mother, who went as a single lady to teach school in an impoverished Appalachian town.

Christy responds to the appeal of the founder of a mission to Cutter Gap, TN. She’s 19 and has not finished college, but she believes she can be a help to the mission. When she gets there, she’s overwhelmed by the poverty, ignorance, and superstition. In her youthful zeal, she’s all fired up to do something and gets frustrated that others haven’t yet. She oversteps her bounds a couple of times, and Miss Alice, a Quaker lady who works at the mission (she seems to be the head under the founder) has to gently remind her that she needs to find out first how the founder wants things done, and she has to learn she can’t come barging in as an outsider telling people how they need to change. Christy clashes at first with Dr. MacNeil, who was actually raised in the area: she feels he needs to correct people’s superstitions, particularly those that are unsafe from a health and medical standpoint. But because he is from the area, he knows that would only alienate people: he feels he has to work within their system, showing better ways and giving advice gently, carefully, and only a bit at a time.

In one sense this is something of a coming-of-age novel as Christy develops from a zealous but immature teenager into a more mature young woman. One part of that coming of age is her faith journey. I don’t think this book was marketed as Christian fiction – I don’t think that was a genre at the time, at least not like it is now – but I believe it’s a natural part of the story that her beliefs would be challenged, matured, and solidified. When she first leaves home, she knows surprisingly little. These days candidates for any mission are examined about their beliefs: maybe that wasn’t done then. But she experiences a few crises of faith. One comes in the face of hardship and evil. the other comes about partly through Dr. MacNeil, an agnostic who looks at God as only something of a “starter-force,” and David Grantland, the minister, who is something of a liberal. One of the saddest scenes is when David and Christy visit a woman who is dying, and she asks him to read portions of the Bible about heaven, which he does, but when she tries to talk about it, it comes out that he doesn’t really believe it, at least not like it says.

In one of the best passages in the book, in which Christy has had a fairly wrenching experience and is wrestling with the evil she has seen, Miss Alice says:

You’re sensitive, Christy. So am I. You want to know why seeing stark evil hasn’t made me rough or bitter?…Remember, I said is was God who was prying the little girl’s hands off her eyes. As if He were saying, ‘I can’t use ivory tower followers. They’re plaster of Paris, they crumble and fall apart in life’s press. So you’ve got to see life the way it really is before you can do anything about evil. You cannot vanquish it. I can. But in My world the battle against evil has to be a joint endeavor. You and Me. I, God, in you, can have the victory every time.’ After that, He was always right there beside me, looking at the dreadful sights with compassion and love and heartbreak. His caring and His love were too real for bitterness to grow in me…

Perceptive people like you wound more easily than others. But if we’re going to work on God’s side, we have to decide to open our hearts to the griefs and pain all around us. It’s not an easy decision. A dangerous one too. And a tiny narrow door to enter into a whole new world.

But in that world a great experience waits for us: meeting the One who’s entered there before us. He suffers more than any of us could because His is the deepest emotion and the highest perception…He doesn’t just leave us and Himself in the anguish. At the point where His ultimate in love meets His total capacity to absorb and feel all our agony, there the miracle happens and the exterior situation changes. I’ve seen that miracle….

Love has mending power. All of us have watched it work in small situations. Well, what I am talking about is a vast multiplication of that power (pp. 94-96)

Later it is revealed that Miss Alice has very personal reasons for these conclusions, having wrestled with the hand of evil leveled against herself.

Besides these issues, feuding between families, battling the moonshine business, handling 67 students from all  different grades and a shortage of supplies, and, later, a typhoid epidemic are all factors. Christy discovers that despite the ignorance and hardships in the mountains, there is also great beauty and dear people.

Quietly, Miss Alice was demonstrating this God of love and beauty too — in small ways and in large. For a few, the concept that life did not have to be all starkness and misery was slowly taking root. Tentatively, timidly – -constantly encouraged by Miss Alice — some of the women were at last reaching out for light and beauty and joy (p. 109).

For a few decades, the plot of a teacher coming from a more civilized area leaving home and going to work in a less civilized one got overworked (usually with a teacher from back East going to the untamed West), to the point that I got pretty tired of it and couldn’t read it any more. But this was one of the first, and the struggles are real.

What do you do when strength is called for and you have no strength? You evoke a power beyond your own and use stamina you did not know you had. You open your eyes in the morning grateful that you can see the sunlight of yet another day. You draw yourself to the edge of the bed and then put one foot in front of the other and keep going. You weep with those who gently close the eyes of the dead, and somehow, from the salt of your tears, comes endurance for them and for you. You pour out that resurgence to minister to the living (p. 471).

Somehow I did not see the TV show from the 90s based on the book, but I am tempted to look it up some time. Kellie Martin does seem well-cast as Christie.

While I would not agree with all the theology in the book (most of it coming from a Quaker perspective), it does contain a good deal of truth. I enjoyed visiting this book once again and retracing Christy’s journey.