Recently I was reading a few paragraphs about the brief life of William Borden. Instead of going into the family business and leading the privileged life of a millionaire, he wanted to be a missionary. Not waiting until he got to the field to begin to minister, he was known for his walk with God and his efforts to reach people all through his college and graduate years. Then he died of spinal meningitis at the age of 25.

That brought to mind others whose walk with God and service for Him in their youth have been exemplary, yet they died relatively young: Jim Elliot, Nate Saint, Henry Martyn, Robert Murray McCheyne, David Brainerd, and others. The question comes unavoidably to mind: since they were so godly, so useful, so effective, why did God take them Home so young when they could have had decades of service in which to accomplish much for Him here?

I don’t know that we’ll ever have the answer to that: it’s wrapped in the mystery of God’s will and sovereignty. Somehow when someone like that dies, especially before their time, humanly speaking, somehow it does inspire others to try to become more like them, so that may be one purpose.

But I saw a new way to look at it this time. What if, instead of taking them home “early,” God had planned before they were even born that they would only live 25-30 years, and they just made the most of it?

Jim Elliot wrote in his journal, before he ever went to the mission field or heard of the people for whom he would give his life:

Seems impossible that I am so near my senior year at this place, and truthfully, it hasn’t the glow about it that I rather expected. There is no such thing as attainment in this life; as soon as one arrives at a long-coveted position he only jacks up his desire another notch or so and looks for higher achievement – a process which is ultimately suspended by the intervention of death. Life is truly likened to a rising vapor, coiling, evanescent, shifting. May the Lord teach us what it means to live in terms of the end.

He makes His ministers a flame of fire. Am I ignitable? God deliver me from the dread asbestos of ‘other things.’ Saturate me with the oil of the Spirit that I may be a flame. But flame is transient, often short-lived. Canst thou bear this, my soul – short life? In me there dwells the Spirit of the Great Short-Lived, whose zeal for God’s house consumed Him. ‘Make me Thy Fuel, Flame of God.’

God, I pray thee, light these idle sticks of my life and may I burn for Thee. Consume my life, my God, for it is Thine. I seek not a long life, but a full one, like you, Lord Jesus.

The ESV version of Psalm 139:16 says, “Your eyes saw my unformed substance; in your book were written, every one of them, the days that were formed for me, when as yet there was none of them.” Some might live only a few hours, a few years, or several decades. God knows our days. We don’t know how many of them we might have. It’s vital to live them all for Him.

That doesn’t necessarily mean becoming a missionary. Not everyone is called to that. It simply means living in close fellowship with Him and being a light for Him in whatever He calls us to: being a student, raising little ones for Him, caring for loved ones, showing forth His love in the home, workplace, and neighborhood.

So teach us to number our days, that we may apply our hearts unto wisdom. Psalm 90:12

For what is your life? It is even a vapour, that appeareth for a little time, and then vanisheth away. James 4:14b 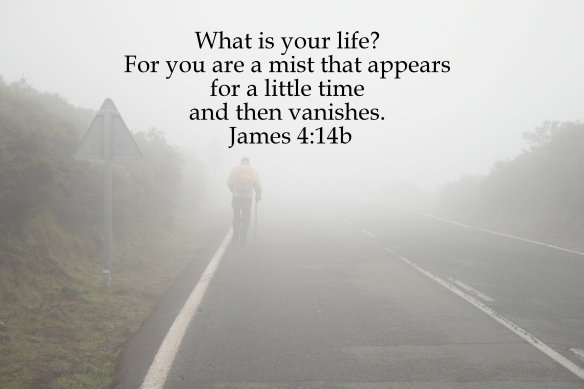