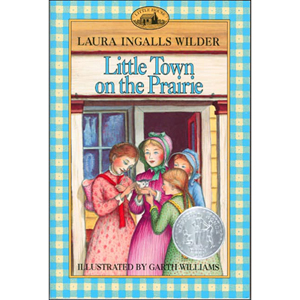 Little Town on the Prairie is the seventh book in Laura Ingalls Wilder’s Little House series and takes place just after The Long Winter. Laura is 14 as the book opens. Her family is still working the claim her Pa has, but they move into town for the winter in case it’s as bad as the last one, both to be closer to what they need and because the claim isn’t sturdy enough to stay warm the whole winter yet.

As usual, the book tells about the joys and everyday experiences and chores of both of summer on the claim and then winter in the town.

One main focus of the family in this story is trying to earn money to send Mary to a college for the blind. Laura gets a temporary job sewing shirts for a seamstress in town (and sees interactions of a family very different from her own), but her main goal is to qualify for a teaching certificate at age 16, and then teach to earn money for Mary’s college, even though teaching doesn’t sound like a goal she would pursue otherwise.

Laura’s nemesis from an earlier book, Nellie Oleson, is back in this one. Though Nellie’s family is in reduced circumstances, she’s still the proud, scheming person she always was.

In town much of Laura’s time is spent at school. It doesn’t seem like there was a winter or Christmas break as we know them now – they went to school all through winter as long as the weather was good, except for the day of a holiday. One teacher Laura’s school had was Almanzo’s sister, who doesn’t have much control of the class, and the misbehavior escalates to extremes until the school board steps in. Laura doesn’t misbehave herself, but she feels guilty at smiling at (and thereby encouraging) some of the boys after she has a couple of negative interactions with Miss Wilder .

One difference in this book from the others is that the Ingalls’ family is seeming to settle down rather than moving from place to place. One highlight of the winter, when people couldn’t work outdoors, was the “Literaries” – evenings once a week where the townsfolk get together and do something for entertainment. One night it was a town-wide spelling bee, once it was people playing various musical instruments. One that is offensive to modern sensibilities is men (including Pa)  dressing in blackface paint and putting on a minstrel-type show.

One difference between the way they lived then and we live now (besides the obvious differences in technologies and living conditions, etc.) is the expectations of how people should act. For instance, after Pa’s visit with the school board to Laura’s school, at home Laura waits for him to talk to her about it, because”It was not her place to speak of what had happened, until he did” (p. 182). When Mary leaves for college, and little Grace starts crying, Laura hushes her with shame that such a big girl is crying. When the family walks into the church-wide Thanksgiving celebration, “Even Pa and Ma almost halted, though they were too grown-up to show surprise. A grown-up person must never let feelings be shown by voice or manner” (p. 228).

I’ve mentioned before that even when I am reading a book that is not necessarily written from a Christian viewpoint, I still read it with Christian eyes and try to discern where the people are coming from spiritually. I’ve never been quite able to figure that out with the Ingalls family. There was an era in our history when people were what we’d call God-fearing in the sense that they believed there was a God, that the Bible was His Word, that He punished or blessed people, that there was a heaven and hell, etc., yet weren’t truly believing on Christ as Savior (“Thou believest that there is one God; thou doest well: the devils also believe, and tremble” James 2:19). There are many Scriptural references and applications in the books. For instance, during the debacle at Laura’s school, she outwardly is the model student, but “she did not think then of the Bible verse that speaks of the cup and the platter that were clean only on the outside, but the truth is that she was like that cup and platter” (p. 167) because she resented, even hated Miss Wilder for her mistreatment of Laura’s sister, Carrie. She has a discussion with Mary about always feeling that Mary was good, but Mary says she wasn’t, confessing that even when she was trying to be as a child, much of the time it was from the motives of vanity and pride. She reminds Laura that the Bible says we’re “desperately wicked and inclined to evil” (p. 12) and says they shouldn’t think so much about whether they are good or bad, but instead should focus on “being sure of the goodness of God” (p. 13). Yet Laura admits to not listening at church beyond the text, since that’s the only thing Pa quizzes them on at home, and later on, when they attend a church revival, though what the preacher says is sound, it’s done in such a fiery way that it was “dark and frightening” to Laura. Her whole family confesses to preferring Rev. Alden’s more quiet style. I do get that. I prefer “quieter” preachers who speak in conversational tones than “ranting and raving” ones. But they only talk about the style rather than the substance of his message, so it’s not clear what they think of it. Laura does her best to act like she’s supposed to except against Nellie Oleson and Miss Wilder. I’m hoping The Pioneer Girl might shed more light on Laura’s personal beliefs.

This book also introduces Almanzo Wilder’s beginning interest in her when he asks to walk her home after some of the events in town. At first Laura is only confused – he’s 23, a homesteader, and her father’s friend. She doesn’t seem to be thinking romantically towards anyone yet. But she accepts his offers and gradually is able to talk normally with him. He shares here how he got his unusual name, something I had forgotten. I had thought this book went into their courtship and up to their engagement, but I guess that’s in the next book.

I don’t remember quite as much from these later books as I do from the earlier ones – maybe I read the earlier ones more often as a child. But I enjoyed this foray into the prairie again. It was nice to see the family settling down, the community growing, and Laura and her sisters maturing.

9 thoughts on “Book Review: Little Town on the Prairie”