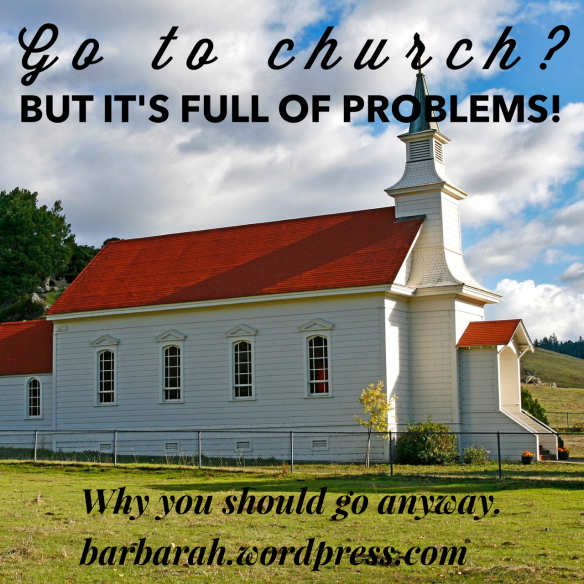 Over the last several years there has been much discussion about people leaving the church and speculation about why.

I’ve seen a number of blog posts and articles the last couple of years written to people who have left church completely because they’ve been hurt by one. The articles are usually quite sympathetic in tone, and the writer (who doesn’t know the person or the church or the situation) apologizes to the wounded absent church member on behalf of the church and gently tries to woo them back. I do appreciate those posts, and we do need to reach out. Sometimes these folks are in a fragile state and need much love and care to rebuild bridges and repair damage wrought by a previous church.

And there are times that leaving a particular church is necessary. Churches can hurt their members in numerous ways, sometimes seriously. Sometimes even when members try to discuss issues with leadership, they’re not heard, or worse, vilified for not being with the program.

But I don’t see anywhere in the Bible a good reason to leave church all together.

No church is perfect. None ever will be because they’re made up of sinners. Redeemed sinners, yes, but, people who are not perfect yet. That’s why there is so much instruction in the epistles about the need for forgiveness, unity, forbearance, love. Just as our personal sanctification is a matter of growth in grace, so is the church’s.

If you’re familiar with Acts and the epistles in the Bible, you may be aware of these issues that were problems in some New Testament churches:

False teachers insisting that believers had to keep portions of the OT law to be saved.

A member living in incest with a family member which other church members knew of but did nothing about.

Teachers proclaiming to have a deeper, mysterious knowledge of Christ that differed from Biblical revelation.

A segment complaining that their needs weren’t being met.

People conspiring to lie to the leadership.

People who quit their jobs to sit and wait for the Lord’s return.

In fact, most of the epistles were written to correct false doctrine, teaching, and practices within the church.

But nowhere in the epistles, the letters to the early churches, do any of the writers urge believers to just quit church over the problems. Now, some of these and other issues would be grounds to leave a particular church if, after attempting to deal with them, there was no change. We’re instructed in the NT to separate from those who preach false doctrine and believers who “walk disorderly,” who live habitually in ways that go against what the Bible teaches after every attempt has been made to reconcile them to God’s Word. We’ve been on the verge of leaving a couple of churches that didn’t have these problems but were headed in ways that we felt were contrary to Biblical teaching and example, but thankfully a job change took care of that for us.

But nowhere in the Bible are believers encouraged to just give up on organized church all together. I bring up that incomplete list of NT church problems just to contrast it with some of the lesser reasons people leave church these days. Yes, the church has problems: it always has and it always will, and we shouldn’t take them lightly.

But – and I am trying to say this as gently and kindly as I can – sometimes, sometimes, I wonder if the problem is unforgiveness or carrying a grudge (which is a type of unforgiveness). Even when there is just cause for leaving a church, is there a just cause Scripturally for leaving church all together? Could one perhaps be short-circuiting their healing or stifling their spiritual growth (or that of their children) because they are not in a church with fellow believers?

One might say that, since every believer is part of the universal church made up of all believers, and since Jesus said, “Where two or three are gathered together in my name, there am I in the midst of them,” (Matthew 18:20), then it doesn’t really matter if we go to an “official” church. Any time we meet with other Christians is church! But is that what the Bible teaches? I would say that meeting with a couple of other Christians at a coffee shop (or wherever) is fellowship: I wouldn’t call it church. I say that for these reasons:

Earlier in Crotts’ book, he says that though there are many verses referring to the church universal, “Other verses, however, clearly use the term ekklesia to refer to a smaller assembly of Christian in one location…Throughout the New Testament, the term ekklesia refers to local churches in the overwhelming majority of cases. A local assembly…is not just some tiny part of the universal church, like the pinkie toenail in the universal body of Christ. It is better understood as a local expression of the body of Christ – complete in itself” (pp. 44-45).

Crotts goes on to say in another place, “If you think of your homeschool group, businessmen’s Bible study, or campus ministry as ‘your church,’ your slice of the Christian pie is far too small” (p. 122). “According to some pastors, every Christian needs a Paul, a Barnabas, and a Timothy. Paul represents as older, wiser believer to mentor you…A Barnabas would be a believer around your own age to encourage you as you experience similar life circumstances. Timothy represents a younger believer looking to you for a godly example and counsel as he or she goes through tests you have already experienced” (pp. 122-123).

Some years ago someone sent me this quote about Jesus attending the worship services of His day:

If ever there was one who might justly plead that the common worship of the community had nothing to offer him it was the Lord Jesus Christ. But every Sabbath found him seated in his place among the worshipping people, and there was no act of stated worship which he felt himself entitled to discard…

We cannot afford to be wiser than our Lord in this matter. If any one could have pled that his spiritual experience was so lofty that it did no require public worship, if any one might have felt that the consecration and communion of is personal life exempted him from what ordinary mortals needed, it was Jesus. But he made no such plea. Sabbath after Sabbath even he was found in the place of worship, side by side with God’s people, not for the mere sake of setting a good example, but for deeper reasons. Is it reasonable, then, that any of us should think we can safely afford to dispense with the pious custom of regular participation with the common worship of our locality?

If ever the assembly of professing believers had serious problems, it was then. But the Son of God did not absent Himself from gathering with them. And even though He took steps to correct some of the issues, it wasn’t perfected when He went back to heaven. But He did make provision for its ultimate perfection, the only way it can be fully healed: by dying on the cross for all of its individual members, who can be saved and cleansed and made whole when they repent and believe on Him.

He has not forsaken His church, and neither should we. “Let us consider how to stimulate one another to love and good deeds, not forsaking our own assembling together, as is the habit of some, but encouraging one another; and all the more as you see the day drawing near.” (Hebrews 10:24-25, NASB). Notice in those verses how it’s not just a matter of not forsaking church: it’s also a matter of love, good deeds and encouragement. We need only need the church: the church needs us. By being and doing what God wants us to, being filled with His Spirit, and exercising the gifts He gave us, we can be part of the solution.

And he gave some, apostles; and some, prophets; and some, evangelists; and some, pastors and teachers; For the perfecting of the saints, for the work of the ministry, for the edifying of the body of Christ: Till we all come in the unity of the faith, and of the knowledge of the Son of God, unto a perfect man, unto the measure of the stature of the fulness of Christ. Ephesians 4:11-13.

See also:
Why go to church?
The Community of Believers

Lisa’s 7 reasons why I still go to church

(Sharing with Inspire Me Monday, Wise Woman,  Woman to Woman Word-Filled Wednesdays and Works For Me Wednesdays)

11 thoughts on “Going to a church with problems”