We had a wonderful Christmas. My oldest son was here for about ten days, and we saw Jason and Mittu and Timothy almost every day during that time. We enjoyed feasting, talking, games, and several outings as a family. Jeremy left New Year’s Day, and we took the Christmas decorations down yesterday. After that I spent most of the rest of the afternoon “chilling” except for necessary excursions in the laundry room. I dozed, caught up on blog reading, and generally came out of the fog of the old year and holiday season. My husband is off for the rest of the week, so we’re still somewhat in vacation mode. But he has a number of projects he wants to get done.

If you missed my favorite books of 2018 post in the year-end flurry, it’s here. That’s one of my favorite posts of the year.

Before we get too far from Christmas, I wanted to share the Christmas cards I made for the family as well as a couple of others.

First, this was for my hair stylist, who was leaving soon to have her fourth baby. Unfortunately, she wasn’t in when I stopped by to give it to her: they found her baby was breach, so they were doing a procedure that day to try to turn it. But I was able to leave the card with her friend there. I’m hoping to get by the shop soon and find out how everything went. But this was my thank you card to her:

I did the “Thank you” with punches, but everything else was done with stickers (on sale, thankfully). I liked the 3D effect.

This was for a friend’s birthday – a friend who likes purple and lavender. 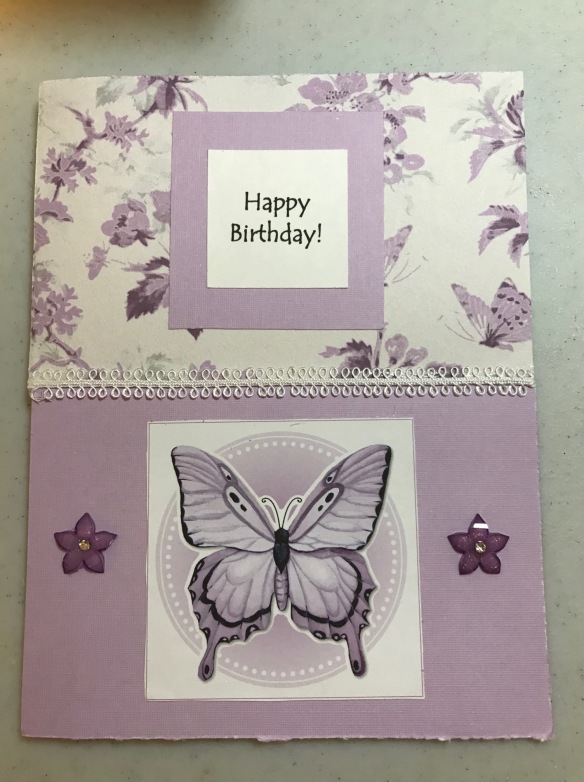 This was for our anniversary:

I couldn’t find a snowman couple design on Cricut, and my freehand attempts were pitiable, so I found some free clipart online and printed it out on cardstock. I did the same with the snow couple on my Christmas card to Jim: 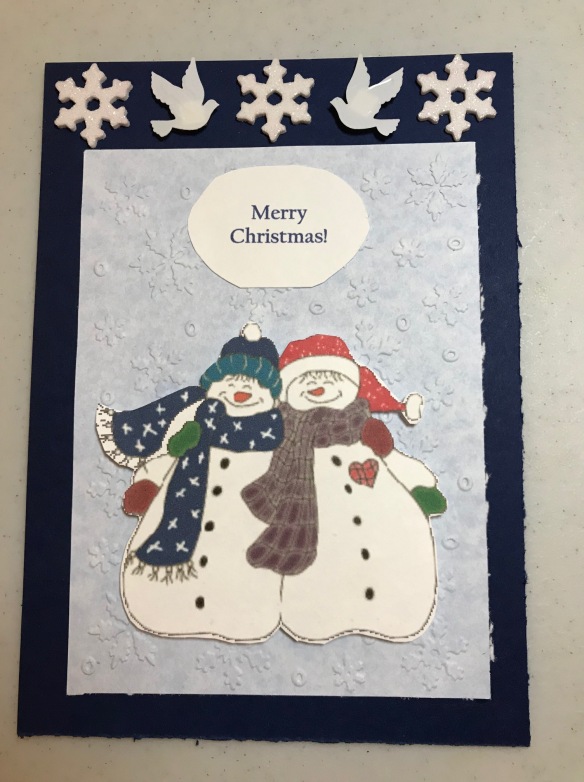 I ran the light blue background through the Cuttlebug embosser. The birds and snowflakes on top were stickers.

This was Jeremy’s card. He likes foxes:

I used the Cuttlebug on the white cardstock and cut the trees out with the Cricut. Everything else was stickers.

Jason’s card was one of my favorites this year. I saw the design in the Cricut files while looking for snowmen and knew I had to use it. 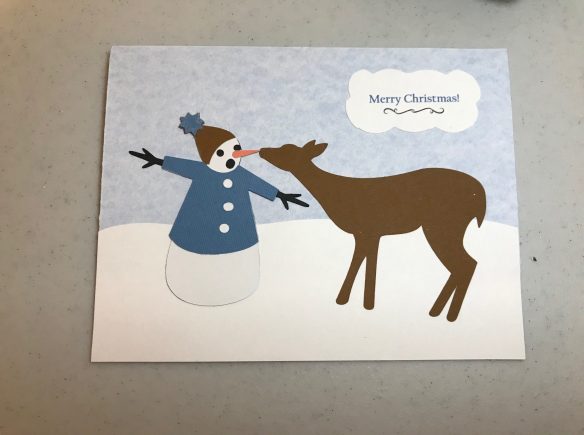 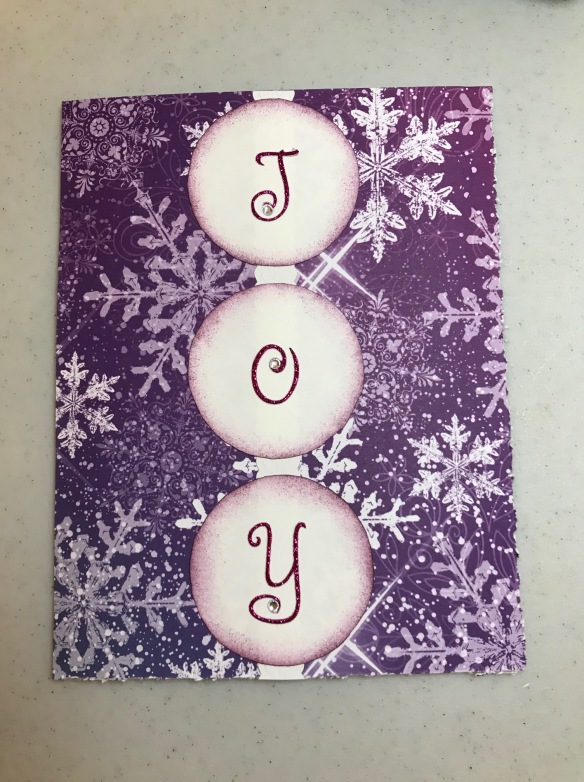 I had the purple letters stickers on hand. Years ago I had seen a friend mention on her blog the technique of dabbing a sponge brush on an inkpad and then brushing it against the edge of a card or cutout to make that border effect. This was the first time I ever tried it, and I really liked how it turned out. 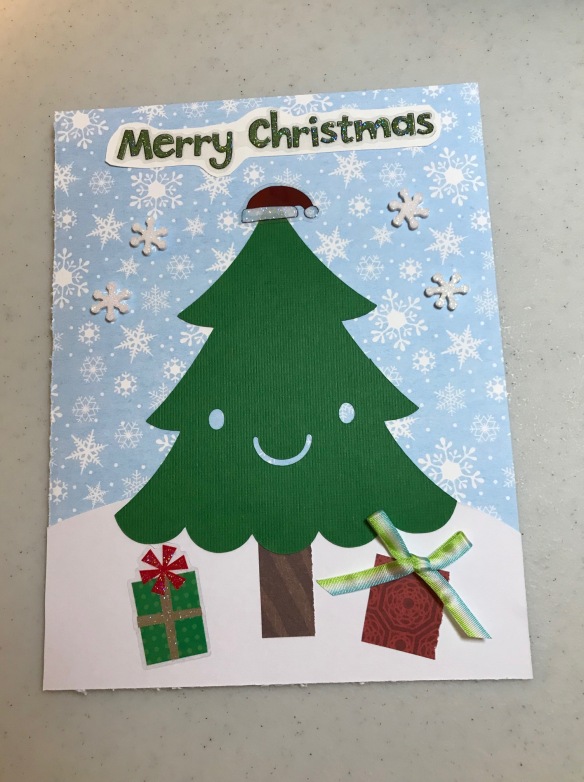 I was going to do something with a snowman, but when I saw this tree on the Cricut Design Space, I *had* to use it. I guess I could have put a snowman on there, too, but I didn’t think of it at the time. One present was a sticker, the other I just cut out freehand and attached a bow.

And, finally, this was Jesse’s:

It was supposed to look as if you were looking out a window to see the snowman waving, but the wood-like border looks more like a picture frame than a window frame. The snowman was another free clipart that I found and printed.

I still haven’t had much time to think about the new year yet. I most look forward to planning my picks for a few reading challenges. I’ll share those next week. I’ve mentioned before that I don’t make resolutions per se, but something about a new year invites a taking stock, making plans, and setting goals. I do plan to finish writing my book this year, Lord willing!

Sadly, two of my favorite book link-ups have come to an end. 5 Minutes for Books will not be hosting their “What’s on your Nightstand” posts any more, and Sherry at Semicolon will no longer host her weekly Saturday Review of Books. I do like summing up my book reading each month, so I may continue that in some fashion: then again, it may be redundant since I post book reviews through the month. What do you think? If you like book link-ups, too, Mary hosts Literary Musing Monday every week, in which we can share three posts of book reviews or devotional posts, and Carole hosts a monthly Books You Loved, where you can link up to your individual book reviews of the previous month.

We never know what a year will bring, of course, but it looks like Jesse will face the most changes this year as he finishes his degree and then looks for a job (hopefully one that will not take him far away).

I used to dread January. After the excitement of the Christmas season, it’s nice to get everything back in order at first. But then the rest of January just seemed dark and cold and cheerless. But last year, for the first time, I saw January as a time of rest. We don’t have any birthdays in the immediate family that month and no holidays after the 1st. So I enjoy a mini-hibernation between the joyful busyness of the Christmas season and the events of the rest of the year. There are always things to be done, of course, but January is pressure-less in comparison to other months.

I used to do a year-end look back at the blog with a summary of my devotional-type posts. But since I have started doing a devotional post almost every Monday, I figured a list of 50+ would be a little long. I wanted to look back and list some of my favorite posts of the year, but there just wasn’t time. My stats tell me that my most-viewed post of the year continues to be Coping When Your Husband Is Away, as it has been almost every year since I posted it in 2011. I had no idea that would hit such a nerve, but I am glad I had a chance to share from my experiences to help and encourage others. My most often-viewed post from this year is my review of Helen Keller’s The Story of My Life. My newer posts fall way below older posts in views. I’m not sure how to think about that! But it’s good that my older posts are showing up in search engines.

I am so thankful for every one of you who visits, reads, and comments. I had no idea, when I started blogging, that I would make such good friends. I hoped that God would use what He has taught me in some way to in turn be a help to others, and it’s such a joy when someone lets me know that has happened. Thanks for sticking with me. 🙂 I wish you a joyous and blessed 2019!

(Sharing with Shannan’s “What I’m Into” monthly summaries)

6 thoughts on “Chats and cards”