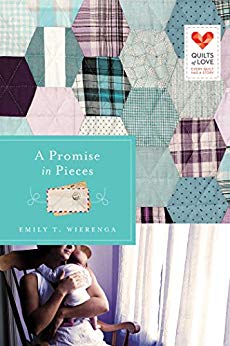 In A Promise in Pieces by Emily T. Wierenga, Clara Kirkpatrick and her best friend, Eva, just finished nursing school during WWII. Clara’s father was a pacifist preacher. “Daddy didn’t know the truth about the war . . . he just stood at his pulpit and spouted about peace while men died to make it happen.” Clara and Eva ran away to enlist as nurses.

Clara’s heart was broken many times over caring for soldiers in various states of health in the worst physical settings. On a particularly bad night, she had a patient named Gareth who was dying but singing hymns. He had been a preacher, but he and his wife, Mattie, felt he should go fight to defend people against the evils of Hitler. Gareth’s faith and example rekindled Clara’s. Gareth asked her to take a letter to his wife as soon as she could after the war.

Clara fulfilled Gareth’s wish and went to see Mattie and deliver Gareth’s letter. “Mattie’s home reached out like an old friend, with its shutters around the windows and its welcome mat and white lace at the windows.” Mattie wanted to talk extensively with the last person to see Gareth. The two became friends, and Mattie gave Clara a baby quilt she had made. Since Mattie’s own dream of having a family was now gone, the quilt was too painful to keep.

After the war, Clara became a midwife. When she delivered a baby, she loaned the blanket to the new mother and then embroidered his or her name on the quilt along with a word of blessing. She didn’t think she’d ever marry: she had seen so much loss and devastation, she didn’t want to love someone only to lose them.

But life took Clara and the quilt in surprising directions. She faced more than one tragedy and struggled with the search for significance. “I somehow missed the war, in a mournful, sadistic kind of way. I missed knowing I was needed. I missed fighting for something. I felt a little lost, not having a clear, defined purpose.”

The story is told by Clara as a grandmother sharing the details with her grandson on a family trip. Some parts of it are shared as flashback chapters. Then the last third or so of the book catches up with the family in real time. and continues from there.

Though sad in parts, the story shares Clara’s growth in faith and her finding her purpose. There are sweet and poignant moments throughout.

But there were also a couple of odd places. In one passage she tells her children:

“God is kind of like sugar. He dissolves inside our hearts. So he’s there, and he’s making us sweeter, so to speak, but he isn’t visible.” There was quiet as they ate, and I thought about the love of Oliver and these children and the friendship of Mattie and the dream of the women at the tables, and I thought, in fact, God is so very visible. We just have to have eyes to see him.”

I think she’s just trying to make the point that God works on us invisibly, from the inside out. But I have trouble with the analogy of God “dissolving” in our hearts.

In another place, she speaks of “How we are all God-in-flesh, born to die to ourselves, so others might be saved.” I think she’s just saying that God calls us to lay down our lives for others as He did. But even though He indwells believers, I wouldn’t call us “God-in-flesh” in the same way Jesus was.

I tried to look the author up online, but links to her website, Facebook page, and Twitter accounts all led to error pages or “Page Removed” messages. I found a few articles of hers online but not enough to really know where she’s coming from. Her other books are nonfiction.

This book is part of a “Quilts of Love” series, but from what I can tell, the books are individual stories unconnected to each other except with the quilting theme.

Except for the couple of odd places I mentioned, this was a good story.

4 thoughts on “Book Review: A Promise in Pieces”