June has been another challenging month for our country. I continue to pray that God will use all that’s happening to draw people to Himself.

Personally, we’re doing much the same as we have been the last couple of months. COVID-19 cases in our area have been rising steadily, so we’re still sheltering in place. We did have one excursion to a state park. Not many people were there, and they stayed pretty much with their own groups.

My husband has been doing the grocery shopping since all this with the virus started, but I took a couple of turns doing it this month for various reasons. I had my first experience wearing a mask, and found it hot and stuffy. I was self-conscious about trying to speak with it on, but overall people seemed to understand each other. I kept forgetting about the 6-foot distancing—odd, because I’ve been extremely conscious of it elsewhere. I got too close to a guy and his mom a couple of times, and he was really jumpy. But he didn’t have a mask on.

We’re still finding what we need, if not the brands or sizes we want.

I also had a doctor’s appointment. I appreciated the doctor’s office taking extra precautions to try to keep anyone with anything that might be contagious separate.

I made three cards for Father’s Day. The first was for my step-father, who is a fan of a certain sci-fi show’s original series. 🙂 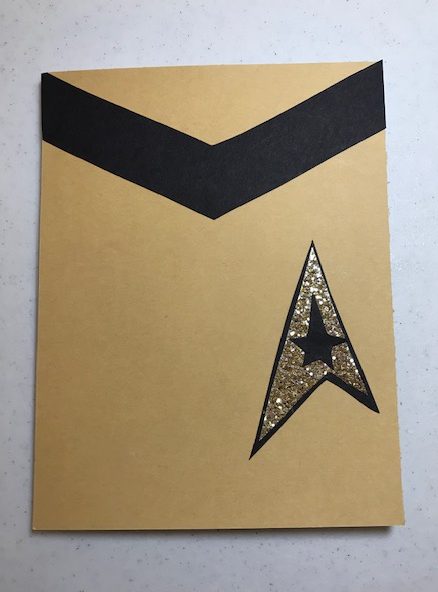 I adapted the idea from something I saw at Pinterest.

This one was done on the Cricut for my husband, Jim. 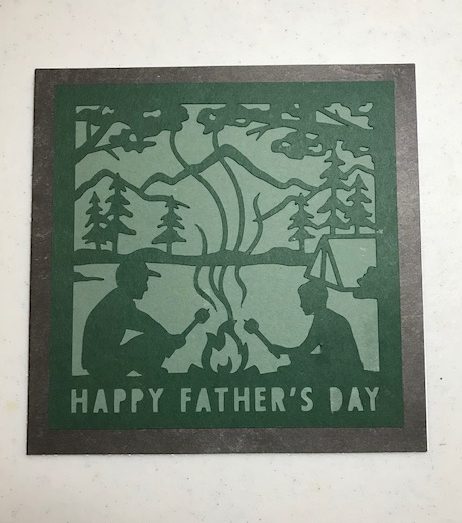 The challenge with this kind of design is gluing all the little pieces down without glue showing somewhere.

This was for my son, Jason, also done on the Cricut: 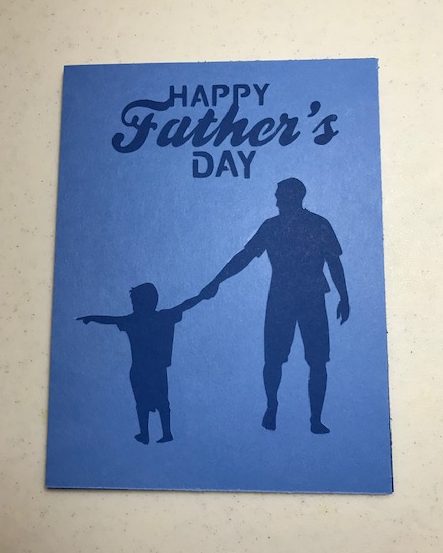 I loved this design because Timothy loves to explore. This looks just like him saying, “Look at that!” or “Let’s go over there!”

I also learned a new skill with Jason’s card. The figure and the words were from two different designs. I wanted to cut them out of the lighter shade and then lay that over the darker shade. But the Cricut automatically defaults to cutting a design out of the far left corner in order to save paper. After searching around, I discovered how to do what it calls attaching, so it would cut out the designs right where I placed them.

Summer TV is kind of a wasteland, with nothing much on besides a lot of celebrity game shows. I don’t even know who many of the celebrities are any more. We watch America’s Funniest Home Videos every week—even if they are reruns, we’ve forgotten enough of them that they are still funny to us. We also enjoy for the most part America’s Got Talent, though occasionally they’ll have an act we have to mute or fast forward through.

While riding my exercise bike, I watched a movie called Wish You Well via Amazon Prime about a family who goes to live with a great-grandmother the children never knew in the 1940s. The father just died in an accident and the mother is in a catatonic state. The daughter is navigating getting used to a new situation, grieving her father, blaming her mother, and getting to know a great-grandmother. The daughter’s father was a writer, and she likes to write as well. I think it had a “damn” or two in it, but otherwise it was a sweet, clean story.

Another I watched while stationary bike-riding was Under the Greenwood Tree. It’s based on a book by Thomas Hardy. I’ve never read Hardy, but evidently this is one of his few novels that isn’t tragic. A new schoolteacher comes to a village and is wooed by the the richest farmer in the area, a serious-minded vicar, and a poor but handsome young man. There are class and education differences, so the teacher has to decide whether to make “a good match” or follow her heart. There’s a subplot with what’s called a choir (but different from what we think of as a choir today) which the vicar wants to replace with a harmonium. According to Wikipedia, Hardy originally wanted to focus on the motley choir (or quire), but then decided to play up the romance instead. This was enjoyable and clean as well. It was also on Amazon prime.

My husband and I watched The Aeronauts on Amazon Prime. I had thought it was about the first people in a gas balloon, but it wasn’t: it was about the first people to break the height record for such a balloon and the man who thought they could be used for weather prediction. It’s based on true events, but some parts were too fantastical to be real. But it was an enjoyable, clean film.

We also finally watched last year’s movie version of Little Women., rented from iTunes. They changed a few things up from the book, but overall it was well-done. The cinematography was gorgeous. They went back and forth in the timeline instead of following a linear pattern like the books does. If I hadn’t been so familiar with the story, I would have found that confusing. But overall I enjoyed it very much.

Since last time, I finished (titles link back to my reviews):

Some of my posts this month, besides the weekly Friday’s Fave Fives and occasional Laudable Linkages:

I had a guest post accepted this month for Almost an Author titled Publishing Dreams Can Come True. I share a bit about the immense obstacles one author overcame to write what’s now considered a beloved classic. I want to encourage authors (and others!) to pursue their dreams and overcome their own obstacles with God’s help.

I also had a devotion accepted for Christian Devotions, but that won’t be published until September. I’d like to write for them more, because they allow for a smaller word count and require that you use just one verse. When I write on a topic, I tend to feel I need to study all the verses to make sure I’m balanced and accurate, and then I feel I need to somehow include all of that study into one blog post. That can make for a lengthy and maybe overly full post. The requirements of this site will help me simplify, hone in on one main thought, and cut out wordiness.

I was grateful and encouraged that these two sites accepted my submissions. I also did get some editing and revising done on my book. Yay!

I just realized I didn’t have any Timothyisms this month! I’ll have to do better at writing them down for next time.

The Bible says we never know what a day may bring forth, but that seems to be even more the case this year. Whatever is ahead, God knows and will give us grace to deal with it. We can go forth in confident expectation.

(Sharing with InstaEncouragement, Worth Beyond Rubies, Grace and Truth,
Faith on Fire, Global Blogging, Hearth and Soul, Senior Salon)