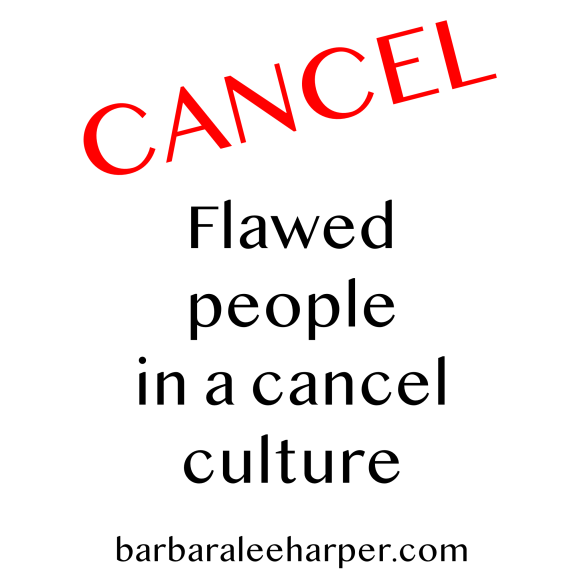 I have not seen the musical Hamilton. But I watched a special on TV called Hamilton’s America, which interlaced how Lin Manuel Miranda became interested in Hamilton’s story, early American history, the road to writing and production, clips from the musical, and commentary from several actors and observers. It was a fascinating special, and I learned much that I hadn’t known about our history.

The musical is famous for is using an ethnically diverse cast. As Miranda said in one interview, he wanted to represent what America looks like today.

In one of the most moving parts of the documentary to me, Christopher Jackson, a black actor who portrayed George Washington, visited Mount Vernon, George Washington’s home. He sat in Mount Vernon’s slave quarters, pondering the disparity of such a great man owning people.

Several of the actors portraying founding fathers wrestled with the fact that these men did both great and terrible things The only conclusion they could come to was that people are are flawed. Appreciating their contributions didn’t mean endorsing everything they said or did.

It doesn’t take much searching to find that most historical figures were flawed. Even most Bible people were flawed. My favorite Bible character, David, was guilty of some of the most heinous sins.

In our fiction, we don’t like a hero or heroine who isn’t flawed because they aren’t realistic.

But somehow, in our modern day, we can’t seem to allow for the fact that people can have sides of themselves that we don’t like or agree with. In today’s “cancel culture,” if you make a single mistake in the public eye, you’re out. People have lost jobs and even been personally threatened when a simple reprimand or correction would have been effective.

Last week when I opened Twitter, I noticed a particular celebrity’s name trending. I don’t follow many celebrities, and am not even all that interested in this man. But I was curious, so I clicked on the hashtag of his name. A backlash had erupted over one of his tweets, which probably could have been worded better. One of those enraged by his comment wrote of “taking great delight in destroying his career.”

It’s horrifying that anyone would enjoy destroying someone’s career in the first place. But it’s even worse to do so while swept along by the mob without taking the time to clarify what was meant or give the benefit of the doubt.

We need to hear first.

It’s true, sometimes we need to take a stand or call people. But “If one gives an answer before he hears, it is his folly and shame” (Proverbs 18:13).

By contrast, James 1:19 says, “Know this, my beloved brothers: let every person be quick to hear, slow to speak, slow to anger.”

People post links and commentaries fast and furiously online. We should give the benefit of the doubt and not assume. It’s always a good idea to fact-check, to wait to hear the whole story, before forming an opinion.

We need to be careful in judgment

Jesus said, “For with the judgment you pronounce you will be judged, and with the measure you use it will be measured to you” (Matthew 7:2). He went on to talk about the ridiculousness of trying to get a speck out of someone else’s eye when we have a log in ours. He also said that if we don’t forgive others, we won’t be forgiven.

Some things are obviously wrong. But if someone is on the opposite side of the political fence than we are, or has a different opinion on a major societal issue, the tendency these days is to write that person off completely. It’s all or nothing.

We need to react redemptively.

Maybe someone made an insensitive remark. Instead of trying to ruin their career or lives, wouldn’t it be better to tell them what was wrong with what they said and give them a chance to see the light?

In the passage mentioned above, Jesus did not say that everyone should just live with logs and specks in their eyes. “First take the log out of your own eye, and then you will see clearly to take the speck out of your brother’s eye” (Matthew 7:5). We’re supposed to help each other see clearly, after we see clearly ourselves.

Our church has been reading through the major prophets in the Old Testament, and now we’re working our way through the minor prophets. Though God threatened judgment on His sinning people, His preference was that they repent and change their hearts and ways. Repentance would avert the judgment, as was the case with Nineveh in the book of Jonah. In the New Testament, chastening and discipline was not destructive but refining. If God gives undeserving people grace, shouldn’t we?

We need to accept each other as flawed.

We know that we are not perfect. We know that no one is perfect. So why do we have trouble accepting people who are not perfect? As the actors of Hamilton came to grips with, good people can do bad things. We all have our blind spots. That doesn’t make wrongdoing okay. But we have to recognize that most people aren’t all or nothing, politically or any other category.

Granted, there are some people with whom it’s impossible to live peaceably. “If possible, so far as it depends on you, live peaceably with all” (Romans 12:18). I have unfriended or hidden toxic people on social media because there is just no peace with them. But that was not after the first disagreement; it was after long years of interaction.

There are even times the Bible tells us to separate from someone else. Again, that’s not for every difference or infraction, and it’s with the ultimate hope for the person’s salvation. But most situations don’t need to go that far.

And we need to remember, if we cancel each other out because of our sins, flaws, and mistakes, there will be no one left.

36 thoughts on “Flawed people in a cancel culture”