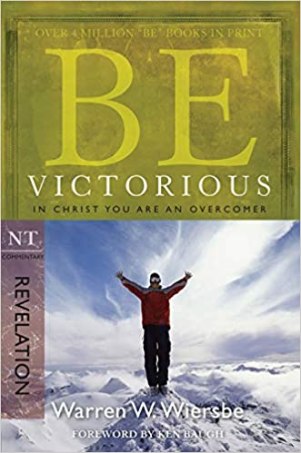 The book of Revelation in the Bible is a challenge for many reasons. Readers and interpreters argue about what’s literal and what’s symbolic, what the symbols mean, what’s going to happen when. In Warren Wiersbe’s brief commentary, Be Victorious (Revelation): In Christ You Are an Overcomer, he mentions “I have dozens of commentaries on this book, and no two authors completely agree on everything.”

In fact, Wiersbe says in his first chapter:

The word translated “revelation” simply means “unveiling.” It gives us our English word apocalypse which, unfortunately, is today a synonym for chaos and catastrophe. The verb simply means “to uncover, to reveal, to make manifest.” In this book, the Holy Spirit pulls back the curtain and gives us the privilege of seeing the glorified Christ in heaven and the fulfillment of His sovereign purposes in the world.

Although Wiersbe gives a more detailed outline of the book, this one emphasizes how Christ is pictured in each section:

In Revelation 1—3, Christ is seen as the exalted Priest-King ministering to the churches. In Revelation 4—5, He is seen in heaven as the glorified Lamb of God, reigning on the throne. In Revelation 6—18, Christ is the Judge of all the earth, and in Revelation 19, He returns to earth as the conquering King of Kings. The book closes with the heavenly Bridegroom ushering His bride, the church, into the glorious heavenly city.

Wiersbe suggests four reasons for the heavy use of symbolism in this particular book. At the time John wrote it, he was an old man exiled on the island of Patmos, a Roman penal colony. He might have used symbols as a kind of code, so the Roman officers wouldn’t pick up on what he was saying. Another reason: the symbols’ meaning and strength would last through the years rather than being specific to a certain time and culture. A third possible reason: “symbols not only convey information, but also impart values and arouse emotion. John could have written, ‘A dictator will rule the world,’ but instead he describes a beast.” Also, some of the symbols carry over from the rest of the Bible: the church as a bride, Jesus as a lamb. In fact, Wiersbe notes that “Nearly 300 references to the Old Testament are found in Revelation! This means that we must anchor our interpretations to what God has already revealed, lest we misinterpret this important prophetic book.” And he warns that we “must not conclude that John’s use of symbolism indicates that the events described are not real.”

Something that stood out to me this time around reading Revelation was the parallels between it and Genesis. Wiesrbe has a chart with the things that began in Genesis (heaven and earth created, day and night established, the curse for sin, death, people driven from Eden, beginning of sorrow and pain, marriage instituted) and were brought to completion in Revelation (new heavens and earth, no need of sun, no night, curse, death, sorrow, tears, people restored to paradise, marriage supper of the Lamb). I know these must have been pointed in in previous studies or sermon series through Revelation, but it it was like I noticed it for the first time. Maybe I had just forgotten.

I’m not going to get into the explanation and exposition of Revelation and the arguments over the whether and what and when of millennium—that would take too much time and space. Wiersbe presents the reasons for the different views but confesses to be a premillennialist. That’s what I was taught the majority of my Christian life. Our current church is the first we’ve been in that has a different view. I also read from my ESV Study Bible. The commentator there was also careful to explain the different views before stating which he thought was correct. Though he differed from Wiersbe regarding the millennium, they agreed on many other things. Good people can differ on these things. I don’t think different views of the end times are anything to argue or separate over. But, I agree that, as Wiersbe says, “no matter what ‘key’ a student may use to unlock Revelation, he cannot help but see the exalted King of Kings as He vindicates His people and gives victory to His overcomers.”

One good reason for reading and studying Revelation, besides the fact that it’s as inspired as the rest of the Bible, is that “When you have assurance for the future, you have stability in the present.” As more than one Christian has said, “I’ve read the end of the book—I know how it all turns out.” Plus, “A true understanding of Bible prophecy should both motivate us to obey God’s Word and to share God’s invitation with a lost world.”

Here are a few other quotes that stood out to me:

The church that loses its love will soon lose its light, no matter how doctrinally sound it may be.

The “overcomers” are not a “spiritual elite,” but rather the true believers whose faith has given them victory (1 John 5: 4–5).

No amount of loving and sacrificial works can compensate for tolerance of evil.

Unloving orthodoxy and loving compromise are both hateful to God.

The first step toward renewal in a dying church is honest awareness that something is wrong.

If men and women will not yield to the love of God and be changed by the grace of God, then there is no way for them to escape the wrath of God.

God’s Word will be there. “The word that I have spoken, the same shall judge him in the last day” (John 12: 48). Every sinner will be held accountable for the truth he or she has heard in this life.

It’s always challenging to go through the book of Revelation, But I am thankful for the help this book gave this time around.

7 thoughts on “Book Review: Be Victorious”