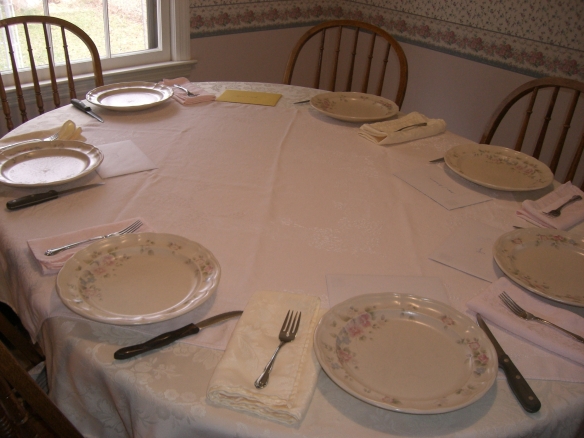 Our new church has a “Dinner For Six” program which I’ve mentioned before: people who want to participate sign up and the coordinators divide everyone into groups of three couples. Each couple hosts dinner for the other two once during a three-month period , with everyone dividing up the meal each time (host family provides main course, one family brings salad and bread, the other brings dessert and a beverage, and they rotate with each meal). It’s a really neat way to get to know people beyond just chatting after services and to meet people from other Sunday School classes or the other side of the church. 🙂

We had our first dinner back in October with our pastor’s family and another couple. The second couple was supposed to host in November, but the wife’s mother became ill and she spent much of the month in the hospital with her or at her home afterward, and not only was there not an opportune time, but they were just under too much pressure. Throughout December we tried to find a time that would work for everyone, but we just never could get together. The new rotations for the Dinner For Six were to begin in January, but we attempted to get our last group together one last time and arranged to do so at our home this past Saturday.

Hospitality is not my strong suit, but I’ve come a long way, by God’s grace, since early married years when I felt I had to spring clean every nook and cranny, get every house project on the docket done, and then make some elaborate new dish when company came. It was nice to have only the main dish to prepare, and I put together a tried-and-true crock pot meal that serves a crowd and planned for a side dish “just in case.” I’m more on top of regular housekeeping than I used to be, but there was plenty to do (you can’t clean too far ahead, because then you’d have to do it all over again before the event). I learned a long time ago that I’ll probably not get everything done I’d like to and to prioritize what things had to get done vs. other things I could then get to if I had time. I was a little dismayed at not having help: Mittu was sick and Jason was ministering to her, and Jesse had an basketball game two hours away (way too far in my opinion!) which Jim attended. I felt bad about not going, but I didn’t feel I could handle being in the car so much before having people over even if I’d gotten everything done ahead of time, plus I felt I should be here in case something happened to delay them. So I actually looked forward to putting on some music and digging in.

Everything came together fairly well. But then a couple of hours before dinner time I got word that the pastor’s wife and daughter were sick and that he would be coming alone with their part of the meal. I was disappointed that his wife couldn’t make it and felt bad that she was sick.

The pastor arrived at 6, but the other couple was nowhere to be seen. We thought perhaps they had mistaken the time, so we waited until about 6:30, then decided we should call them. Not only had they forgotten all about it, but their refrigerator had broken down and they were right in the midst of cleaning everything out of it and putting a new one in, so even though we had enough food for them to go ahead and come without bringing their portion, it just was not a good time. If I had been thinking we could have offered to take dinner to them, but that just didn’t come to mind.

We enjoyed the time with the pastor, but I couldn’t even really enjoy feeling a little like the Shunammite woman who helped feed the man of God because I felt that, instead of ministering to someone who was out and about and needing refreshment, I was taking him away from his sick family who would rather have him home. And though the conversation around the table was pleasant, even fun, after everything was over, I felt profoundly disappointed.

Because I felt like I had gone to all that work for nothing.

Nothing? No, not if everything is done as unto the Lord. Hospitality does not depend on the number ministered to, and even if only my own family had shown up, are they not worthy of hospitality as well? I do cook and clean for them regularly, of course, and we have an occasional special night with tablecloth, special foods, etc. — this could have been a special celebration “just because.”

Because I wanted my new friends to see my home.

Ah, there is the crux of it. No, it’s not like we live in a mansion and I wanted to offer a museum tour. I enjoy visiting other people’s homes and seeing what other people have on their walls, how they arrange things, what they collect, what colors they like, etc. –it helps me get to know them better and see their personality reflected in their home. And I wanted them to get to know me in the same way. I don’t think that’s necessarily wrong. But hospitality is not about me. It’s not supposed to be, anyway. It’s supposed to be centered on ministering to others.

As I worked through my disappointments, I looked for several good things from the experience:

And in church the next day, hearing some of the burdens and prayer requests and even victories as one new precious soul came to the Lord, I was reminded that there are much bigger things going on in the world than my little dinner, and I need to get over myself. 🙂

If you’re still reading, thanks for listening to my rambling as I tried to work out my thoughts and perspectives. 🙂

15 thoughts on “The Dinner Party That Wasn’t”