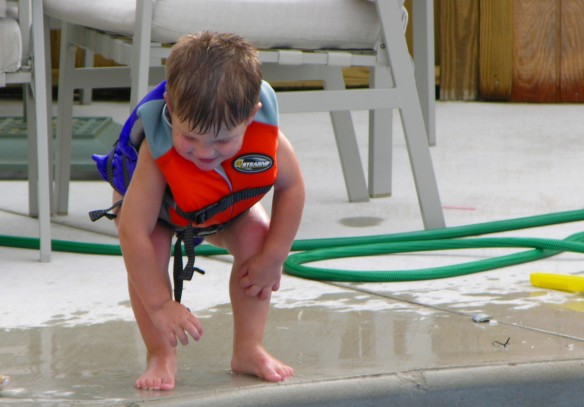 (Photo courtesy of the morgueFile.)

This is an excerpt from a recent Elisabeth Elliot newsletter, which was in turn taken from a chapter titled “Learning the Father’s Love” from the book A Lamp For My Feet:

When my brother Dave was very small, we spent a week at the seaside in Belmar, New Jersey. In vain my father tried to persuade the little boy to come into the waves with him and jump, promising to hold him safely and not allow the waves to sweep over his head. He took me (only a year older) into the ocean and showed Dave how much fun it would be. Nothing doing. The ocean was terrifying. Dave was sure it would mean certain disaster, and he could not trust his father. On the last day of our vacation he gave in. He was not swept away, his father held him as promised, and he had far more fun than he could have imagined, whereupon he burst into tears and wailed, “Why didn’t you make me go in?”

An early lesson in prayer often comes through an ordeal of fear. We face impending adversity and we doubt the love, wisdom and power of our Father in heaven. We’ve tried everything else and in our desperation we turn to prayer–of the primitive sort: here’s Somebody who’s reputed to be able to do anything. The great question is, can I get Him to do what I want? How do I twist His arm, how persuade a remote and reluctant deity to change His mind?

Poor Dave! His father could have forced him to come into the water, but he could not have forced him to relax and enjoy it. As long as the child insisted on protecting himself, saving the life he was sure he would lose, he could not trust the strong love of his father. He refused to surrender. In this simple story we hear echoes of the most ancient story, of the two who, mistrusting the word of their Father, fearing that obedience to Him would ultimately bar them from happiness, chose to repudiate their dependence on Him. Sin, death, destruction for the whole race were the result.

Learning to pray is learning to trust the wisdom, the power, and the love of our Heavenly Father, always so far beyond our dreams. He knows our need and knows ways to meet it that have never entered our heads. Things we feel sure we need for happiness may often lead to our ruin. Things we think will ruin us … if we believe what the Father tells us and surrender ourselves into His strong arms, bring us deliverance and joy.

The only escape from self-love is self-surrender. “Whoever loses his life for Me will find it” (Matthew 16:25, NIV). “Dwell in my love. If you heed my commands, you will dwell in my love, as I have heeded my Father’s commands and dwell in His love. I have spoken thus to you, so that my joy may be in you, and your joy complete” (John 15:9-11, NEB). My father knew far better than his small, fearful, stubborn son what would give him joy. So does our Heavenly Father. Whenever I have resisted Him, I have cheated myself, as my little brother did. Whenever I have yielded, I have found joy.

4 thoughts on ““Learning the Father’s Love””