When Adoniram Judson first went to Burma, six long years passed before anyone fully received his message and was converted. A few years later he was arrested and accused of being a spy when his country was at war with Burma. His feet were tied to poles that were then raised so that only his shoulders rested on the ground. Prisoners were executed daily, and no one knew when their time would be next. They were taken on a death march to another prison. Finally he was released after two years. But his brave and faithful wife died from a fever, with their child soon following after – their third child to have died. For a while Adoniram built what he called a hermitage in the woods where he would go off to be alone. He dug an empty grave and spent time looking at it and contemplating death. On the third anniversary of his wife’s death, he wrote, “God is to me the Great Unknown. I believe in Him, but I find Him not.”

After C. S Lewis’s wife died, in his grief he wrote, “Not that I am (I think) in much danger of ceasing to believe in God. The real danger is of coming to believe such dreadful things about Him. The conclusion I dread is not ‘So there’s no God after all,’ but ‘So this is what God’s really like.'”

The book of Job is filled with his laments and questionings of God. Jeremiah accused God of deceiving him.

Our 52 year old pastor died of pancreatic cancer right in the middle of a fruitful ministry. A young mom in our church died suddenly and totally unexpectedly due to a reaction to a drug, leaving behind a grieving  husband and two children. The 3 year old grandson of friends has been diagnosed with leukemia; the 25 year old daughter of friends is fighting breast cancer, the 6 year old relative of a brother-in-law was shot in cold blood at his school. When I started writing this, a hurricane was barreling toward the east coast after having already passing over several islands.

In some ways man’s inhumanity to others is understandable in that God gives people free will, and many choose to exercise it away from Him rather than toward Him. It doesn’t explain why a teenager would shoot a child except that it’s an extreme example of exercising self-will to sin against another.

We can even come to terms with death in the big picture view of the result of living in a fallen world.

But a child getting leukemia, adults dying in their prime, death and destruction from storms — that’s a little harder to come to grips with.

He doesn’t always explain why He allows what He does. Sometimes He just wants us to trust Him. But sometimes I think He doesn’t explain because we just wouldn’t understand.

I always told myself that I would never be one of those parents who said something must be done “Because I said so!” But I learned early on that you can’t always explain something to a child. They don’t have the understanding, the context, or the experience to comprehend why certain things are required of them and why others things are denied them. At times they think that the parents who are trying to do what’s best for for the children they dearly love are horribly unfair. Sometimes they just want what they want when they want it and they don’t care about any reasons why they can’t have it.

It helps to remind ourselves there are Scriptural reasons for suffering. It helps even more to go back to what we know of the character of God. He is kind. He is good. He is love. He loves us. Nothing that happens to us negates any of those truths.

Amy Carmichael, when pondering some of the same questions, wrote:

Yet listen now,
Oh, listen with the wondering olive trees,
And the white moon that looked between the leaves,
And gentle earth that shuddered as she felt
Great drops of blood. All torturing questions find
Answer beneath those old grey olive trees.
There, only there, we can take heart to hope
For all lost lambs – Aye, even for ravening wolves.
Oh, there are things done in the world today
Would root up faith, but for Gethsemane,

For Calvary interprets human life;
No path of pain but there we meet our Lord;
And all the strain, the terror and the strife
Die down like waves before his peaceful word,
And nowhere but beside the awful Cross,
And where the olives grow along the hill,
Can we accept the unexplained, the loss,
The crushing agony – and hold us still.

Children who love their Father know that when He says, “All things work together for good to them that love God,” He must mean the best good, though how that can be they do not know….

What does a child do whose mother or father allows something to be done which it cannot understand? There is only one way of peace. It is the child’s way. The loving child trusts.

I believe that we who know our God, and have proved Him good past telling, will find rest there. The faith of the child rests on the character it knows. So may ours, so shall ours. Our Father does not explain, nor does He assure us as we long to be assured… But we know our Father. We know His character. Somehow, somewhere, the wrong must be put right; how we do not know, only we know that, because He is what He is, anything else is inconceivable. For the word sent to the man whose soul was among lions and who was soon to be done to death, unsuccored, though the Lord of Daniel was so near, is fathomless: “And blessed is he whosoever shall not be offended in me.”

There is only one place we can receive, not an answer to our questions, but peace — that place is Calvary. An hour at the foot of the Cross steadies the soul as nothing else can. “O Christ beloved, Thy Calvary stills all our questions.” Love that loves like that can be trusted about this.

And when Job, Adoniram Judson, and so many others mentioned come out on the other side of the trial, though they may not have answers to their “whys,” they often testify that they know God better, felt His goodness and grace like never before, found Him good and faithful and trustworthy, found themselves upheld in ways they could not have imagined. Adoniram Judson wrote in a letter, “The love of Christ! The breadth and length and depth and height of the love of Christ! If I had not felt certain that every additional trial was ordered by infinite love and mercy, I could not have survived my accumulated sufferings.”

As one whom his mother comforts, so I will comfort you…Isaiah 66:13a

I believe that I shall look upon the goodness of the Lord in the land of the living!
Wait for the Lord; be strong, and let your heart take courage; wait for the Lord! Psalm 27:13-14

For I consider that the sufferings of this present time are not worth comparing with the glory that is to be revealed to us. Romans 8:18

Surely he has borne our griefs and carried our sorrows. Isaiah 53:4a 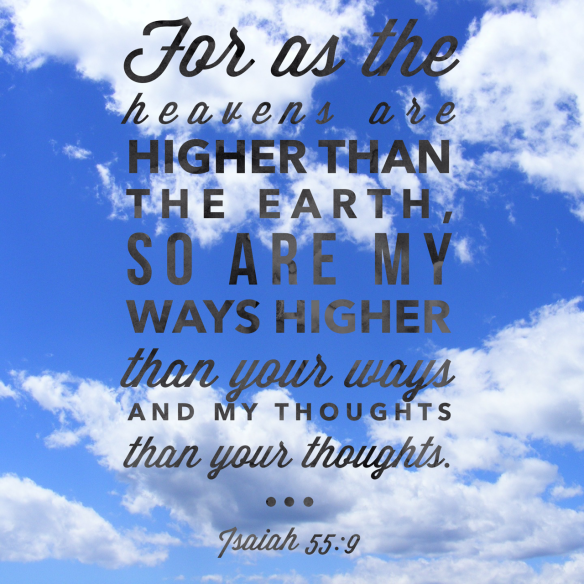 12 thoughts on “A God We Don’t Understand”