It’s been a while since I’ve had a “just chatting” kind of post, so I thought I’d catch up with the doings around here.

I wanted to let you know that iBelieve.com contacted me and asked to reprint an article I had submitted to the Perennial Gen about caregiving. They gave it a different title, but the content is the same: 3 Lifegiving Tips for Caregivers Struggling with Guilt and Resentment.

My WIP (work in progress) has over 29,000 words now! Yay! I’ve written most of what was in my mind. Now I am going through notes I left to myself on my phone to remind me of points I wanted to add. Then I need to go through a list of posts and a stack on books that I wanted to reference. Then I need to take a look at each individual chapter and see what shaping-up I need to do. This is all a bit more tedious, but very necessary. I am still mulling over some of the same writing questions I mentioned a month or so ago, but I think I am about ready to create an author Facebook page. It seems like that should wait til I am finished or even published, but I am told publishers want that kind of thing established beforehand.

As many of you know, I like to make cards as a creative outlet. It has been a while since I shared them, so here’s what I have made since last time I showed them.

This was my Father’s Day card for Jim, done on the Cricut. 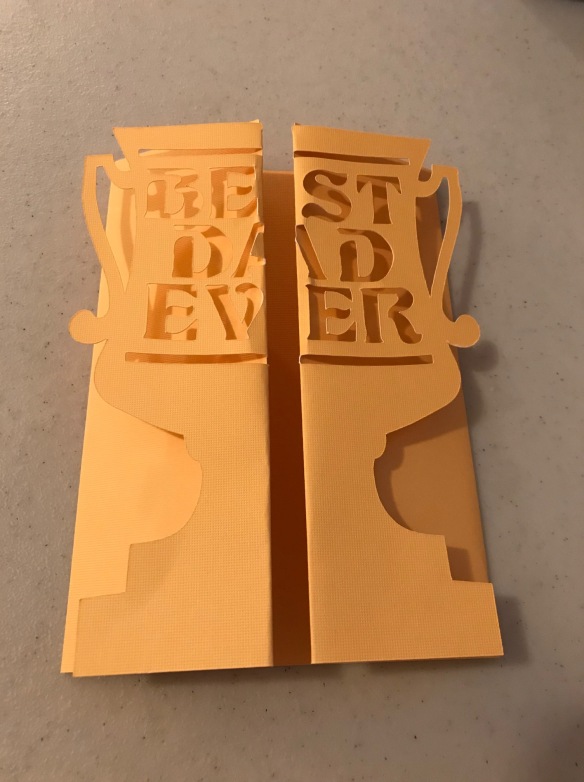 This was for Jason for Father’s Day, also cut on the Cricut machine. As Timothy’s into super-heroes, I thought this would fit. 🙂

I forgot to take a picture of my step-father’s card.

This was for a friend’s birthday. The paper was so pretty in itself, I didn’t want to cover it up with a lot of other things.

This was for Jim’s mom’s 90th birthday. She likes yellow.

This was for Jason’s birthday last month. Technically the design is not a birthday one, but when I saw it on the Cricut design space, I *had* to use it. I also learned a new skill with this one: changing out the blade for a Cricut pen, which does the lettering.

I mentioned yesterday the books I’ve read the past month. We don’t watch many movies – Jim prefers shorter programs. But we’ve seen a few over the last several months. The Book Thief was excellent, set during WWII about a girl sent to live with foster parents in Germany who then hide a young Jewish man in their basement. Wonder, about a deformed boy trying to go to school for the first time, was really good, too, with several touching moments and a lot of fun ones. The Finest Hours was based on a true story about the largest small boat rescue ever. A tanker was ripped in half during a storm, and four men in a small boat brought back 32 survivors (the boat was only supposed to hold 20 or so). Warning: there were a couple of bad words at the beginning. But otherwise this was excellent. I especially liked watching the main character’s growth.

Lisa would be so proud of me! She mentions several good-sounding podcasts every month, but usually I listen to either music or audiobooks. But recently I listened to several in regard to the recent PBS adaptation of Little Women. It was fun hearing some of the background and views from some of the actors.

For July 4th, my son and daughter-in-law brought over some themed plates that someone had given them. When we asked Timothy what the plates reminded him of, with their red and white stripes and white stars on a blue background, he said, “Captain America!”

One day I spilled my lunch down my front and lamented, “I’ve been feeding myself for over 50 years, and I still keep spilling!” Jim said, “It’s only going to get worse.”

One day I found this on my bathroom ceiling:

I called Jim to come and take care of it for me. He said, “It’s ugly.”

Besides the weekly Friday’s Fave Fives, book reviews, and occasional laudable linkage, my favorite posts the last month have been:

When the Solution I Want Isn’t What I Need

Psalms for the Sleepless

Violence in Films, Books, and the Bible

We’ve had a pretty quiet, routine summer so far. Lots of fun times together with the family. Later this month my oldest son comes for a visit, and Jim will take some time off then. We usually have a few outings the week Jeremy is here. It will be nice to have some extended family time and a bit of a “stay-cation.”

Better get back to work now. Thanks for visiting and chatting with me!

(Sharing with What I’m Into with Leigh Kramer)