My husband and I have visited the Biltmore Estate in Asheville, NC, a handful of times. I believe the last time we went was for our 25th anniversary fifteen years ago. I had pretty much decided there was probably no need to return—once you’ve seen it in different seasons, there’s nothing new to see, I thought.

And then I heard they were going to have an exhibition of the Downton Abbey television show at the Biltmore!

Then the question was—how should I go about seeing it? My daughter-in-law and I loved the show, but my husband and youngest son had never seen it. I think Jason, Mittu’s husband had seen at least some episodes, but I don’t know if he was as into it as I was. So should I go by myself? Should I see if Mittu wanted to take a day trip with me? Should I ask a friend? Should I ask my husband even though he wasn’t familiar with the show?

The dilemma was solved when Mittu asked if we could go to the exhibition in lieu of presents for her birthday this year. We went last Saturday.

We got into Asheville around 11 and ate lunch at Farm Burger, as its online menu showed it had gluten free options for Mittu and Timothy. I didn’t want anything heavy or greasy, so I tried the build-your-own chicken burger. It was pretty good. I also snagged a few of Jason’s garlic parmesan fries, and they were great.

Unfortunately, the DA exhibits were in two different buildings and not in the Biltmore house itself. You have to choose a time when you buy tickets, so we needed to go in to see the house when we first arrived.

If you’re not familiar with the Biltmore, it’s the largest home in America, built by George Washington Vanderbilt. He had visited the Asheville area in 1887 and liked it so well, he began buying up land to build a home. Construction began in 1889. He was a bachelor at the time and planned to being his mother to live at the house and to host family and friends. He didn’t marry until 1898, when he was 35. The estate wasn’t even entirely finished then, but it was livable.

I’m reading The Last Castle: The Epic Story of Love, Loss, and American Royalty in the Nation’s Largest Home by Denise Kiernan about the Biltmore House. I had hoped to finish it before visiting, but was only halfway done. Still, what I read enhanced the visit, and and I am sure that the visit will enhance the remaining reading.

One of the things that impressed me the most was that the land had been fairly depleted before building began. Frederick Olmsted, a landscape architect whose long list of credits includes Central Park, was asked to do the landscaping at Biltmore. He had to take into account not only what the land would like like at the time, but how things would grow over time.

The second impressive thing about the estate, besides the sheer size, is the detail in every single aspect. This is the right half of the house as we’re coming from from where the shuttle dropped us off: 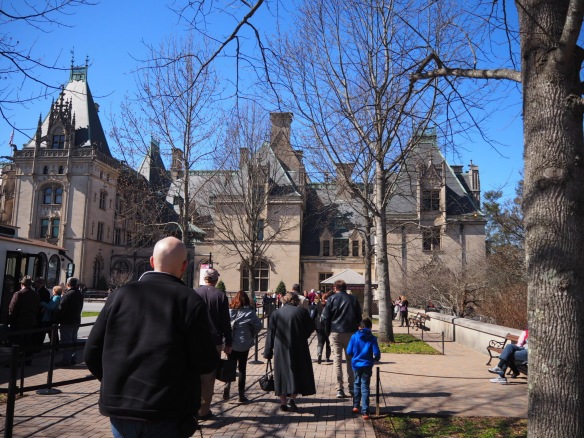 I have many more pictures that one post will hold, but this is what is called the Winter Garden, just inside the front doors and to the right: 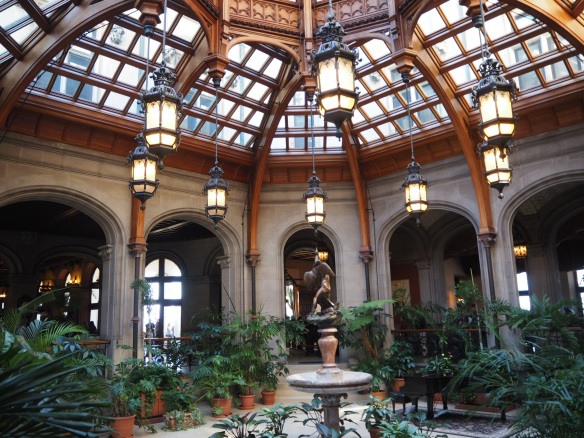 One of my favorite rooms is the library. Vanderbilt was known for being well-read, even buying unbound manuscripts so he could have them bound the way he liked them. 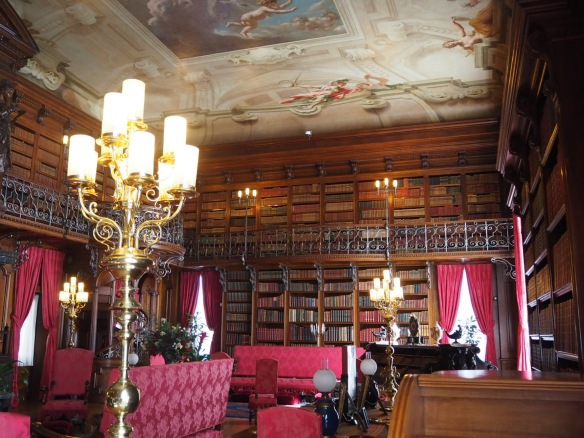 You can see a bit of the painted ceiling. One of my favorite moments occurred when we were all exclaiming. “Look at the painting! Look at all the books! Look at the spiral staircase in the corner!” And Timothy (almost age 6) said, “Look at the security camera!” 🙂

My second favorite room was Mrs. Vanderbilt’s bedroom. I didn’t like the black bedcoverings so much, but I loved the ceiling. We didn’t get a picture, but you can see a glimpse here.

We got to go up an elevator that was original to the building. Unfortunately it only went between the first and second floors. The design was all wrought iron, but at some point they put plexiglass behind it for safety purposes. We didn’t get pictures of it, but someone else’s video is here.

One room I didn’t remember seeing before was called the Halloween room, painted by George’s daughter Cornelia. There they offered a photo opportunity with George and Edith. 🙂 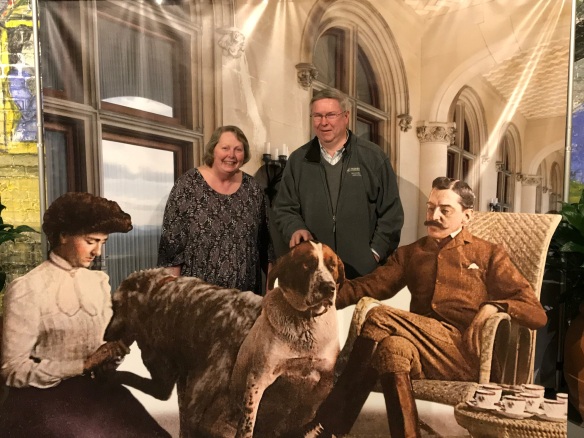 The tour includes the downstairs area, where the bowling lanes, kitchen, laundry, and servant’s rooms are. Another funny moment here: we tried to explain to Timothy what the chamber pots were for. When he heard someone else commenting on them, he called them “Thunder pots.”

Just outside the house is a group of little shops and eateries. We enjoyed a snack before heading down to the DA exhibit. Unfortunately, we didn’t have time to explore the little shops if we wanted to catch the DA exhibits before they closed.

This part of the exhibit was called interactive, but that’s probably because there are life-sized videos of Carson speaking to the guests as if he can see them. There are also some artifacts behind glass or in drawers covered with glass. When you first walk in the hallway, there is a massive picture of the DA cast in costume. Then there is a stop to watch a video. Then we stepped into a room where we saw larger than life-sized pictures of half the faces of the cast (not half the cast—half the face of each cast member).

Just to show you a couple of representative displays, pictures and text like this were on walls and tables discussing all the characters and different aspects of the times. 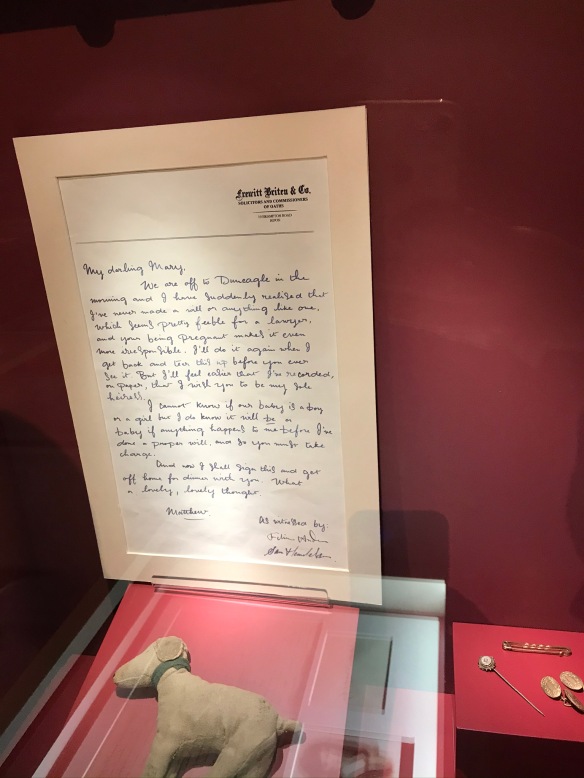 This is where I have a wee bit of complaint. This area was extremely crowded, and there was not a direct flow of traffic. It was very hard to get around to look at anything, much less take time to read the displays. I got around the whole room and glanced at almost everything, but was so claustrophobic, I just wanted to get out as soon as possible. This would have been better in a larger area, or even scattered around in some of Biltmore’s more open areas.

The next section was a lot more fun. It included sets from the show. I didn’t see any information which specified, but I am assuming these were the actual sets (if not, they were very good recreations). 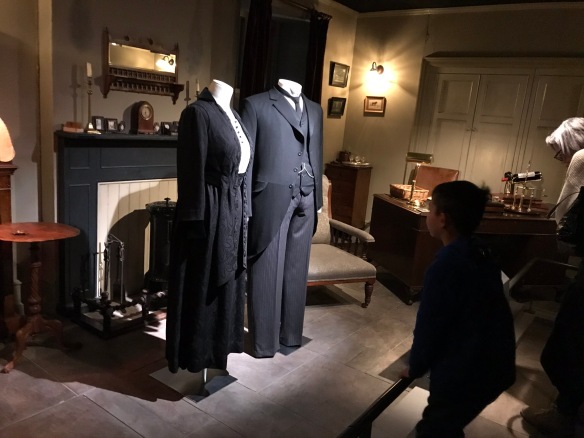 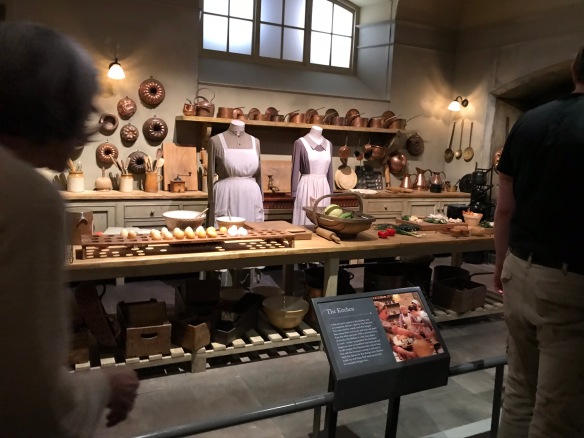 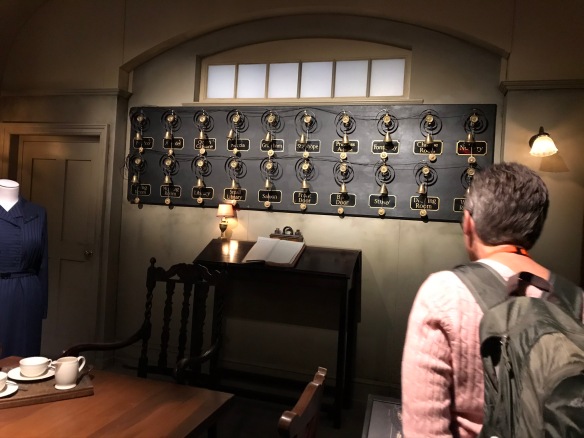 They also had the formal dining room and Lady Mary’s bedroom.

Then we had to take another shuttle to Antler Hill Village to see the costumes. I enjoyed this quite a lot. Even without remembering who wore which clothes, we found ourselves guessing which dress went with which character just by its style. I have multitudes of pictures but will just share a couple. 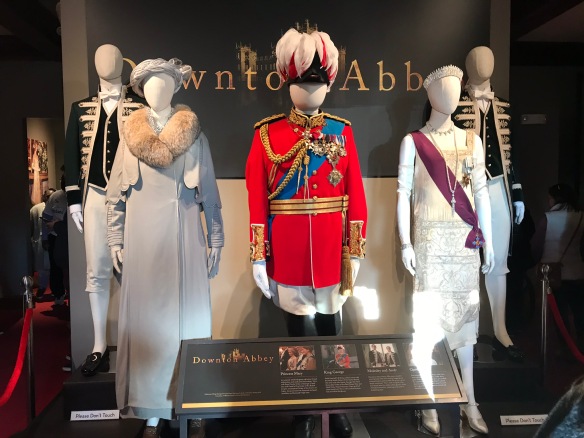 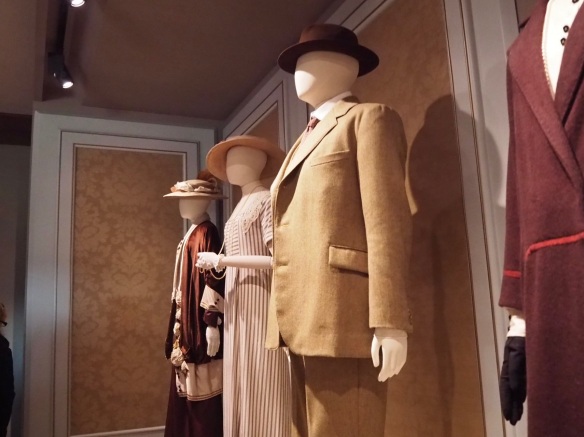 I had mentioned at the beginning feeling like there was no need to go back to Biltmore and see the same things again. What i didn’t know was that the Antler Hill Village area was all fairly recent, plus a few new rooms had been opened up. Plus, in all the times we’ve been there, we’ve never seen the greenhouse or Biltmore Village. The latter was built by Vanderbilt for workmen and employees. I’ve been reading in the book I mentioned about All Souls Cathedral, also built by Vanderbilt, and its stained glass windows dedicated to George’s mother and close friends and other family who passed away. I had hoped to catch a glimpse of it, but by the time we were done, we were tired and needed to get back on the road. So some day I’d be up for another visit to see some of these areas. 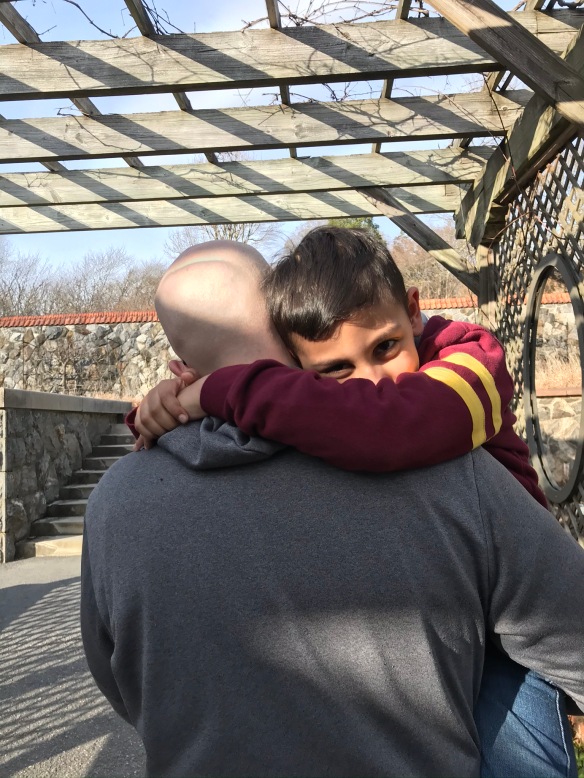 Jason and Mittu did stay overnight and went back the next day to see the greenhouse and some other areas. Timothy was a little trooper and seemed to enjoy himself. We were glad there were some grassy areas in-between buildings where they allowed people to walk and kids to run. He was looking forward to the pool at the hotel. 🙂

All in all, it was a fun visit. I enjoyed seeing the Biltmore again and loved seeing the Downton Abbey sets and costumes. If you’re a fan of the show, I hope you get a chance to see the exhibit. It’s at the Biltmore until April 7. I’m assuming the house and exhibit would be a lot less crowded on weekdays: I’d recommend going then if you can.

Have you visited the Biltmore or see the Downton Abbey exhibit?

13 thoughts on “The Biltmore Estate and Downton Abbey Exhibit”