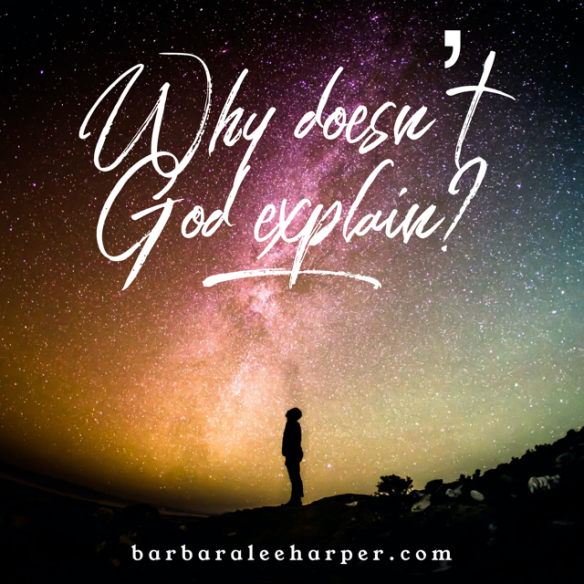 I promised myself that I would not be the kind of mom to say, “Because I said so.”

I believed in discipline and obedience. But I also believed in helping children understand what was requested of them. Understanding would make everyone happy and make life easier.

So I thought. Until I actually had children.

Have you ever tried to explain to a three-year-old why they can’t have dessert before dinner? Why they really do need a nap? Why they can’t stay at their friend’s or the playground for the rest of the day?

Children have an uncanny ability to find loopholes or come up with alternatives. They don’t have the frame of reference to understand why their parents won’t allow what seems perfectly reasonable.

No parent is infallible. We all learn that some of the things we insisted on really didn’t matter in the long run. But usually we do the best with what we know. And sometimes we have to play the authority card.

Sometimes we want to say, “My dear child. I’ve been around the block a few times. I know you. I know how life works. I have your best interests in mind, really. I know you don’t understand, but just trust me on this. It will make sense when you’re older.”

As Christians, our heavenly Father doesn’t always explain Himself. He doesn’t have to, of course. He is God.

Still, we often want to offer our own suggestions. Or we want to dig in our heels and wail until everything is explained to our understanding.

I think one reason God doesn’t always explain what He is doing because He wants us to trust Him. He tells us plenty in His Word. He gives us some reasons He allows and even ordains suffering. He’s given us multiple narratives that show how He worked behind the scenes to bring everything together to fulfill a promise or to deliver His people. The more we get to know Him, the more we realize He knows what He is doing, the more we can rest in His wisdom and love and care.

But I think sometimes He doesn’t explain because we wouldn’t get it if He did. His thoughts are as high above ours as the heavens are higher than the earth (Isaiah 55:8-9). “Man’s goings are of the Lord; how can a man then understand his own way?” (Proverbs 20:24, KJV). We don’t see the big picture. We don’t have His frame of reference. No matter how much He explained, we still wouldn’t understand some things.

John Piper has said, “God is always doing 10,000 things in your life, and you may be aware of three of them.”

I’ve always felt a bit frustrated that nobody ever told Job what went on in the heavenlies that led to all his suffering. God didn’t explain, but He did manifest Himself. And that satisfied Job. His glimpse of God’s power, majesty, wisdom, and care was enough.

There are songs that say we’ll understand everything better in heaven. I don’t know if that’s actually the case. He is God, and we are not and never will be. Though we’ll understand much more then than we do now, we still won’t know and understand everything He does. But in heaven, we probably won’t care. We won’t see through a glass darkly any more. Our sin nature will have been left behind. Our faith will be turned to sight. We’ll behold the King in His beauty. We may not understand all there is to understand. But we’ll wonder why we ever questioned Him.

It’s not wrong to ask why. Many Biblical people did. A lot depends on whether we’re asking our of defiance, challenge, contempt, or pain and confusion. God might answer. He might not. We might not be able to understand His answer, anyway. But the better we know Him, the more we can trust Him.

Amy Carmichael wrote in Rose From Brier, a book to suffering people from her own experience of suffering:

What, then, is the answer? I do not know. I believe that it is one of the secret things of the Lord, which will not be opened to us till we see Him who endured the Cross, see the scars in His hands and feet and side, see Him, our Beloved, face to face. I believe that in that revelation of love, which is far past our understanding now, we shall “understand even as all along we have been understood.”

And till then? What does a child do whose mother or father allows something to be done which it cannot understand? There is only one way of peace. It is the child’s way. The loving child trusts.

I believe that we who know our God, and have proved Him good past telling, will find rest there. The faith of the child rests on the character it knows. So may ours, so shall ours. Our Father does not explain, nor does He assure us as we long to be assured… But we know our Father. We know His character. Somehow, somewhere, the wrong must be put right; how we do not know, only we know that, because He is what He is, anything else is inconceivable. For the word sent to the man whose soul was among lions and who was soon to be done to death, unsuccored, though the Lord of Daniel was so near, is fathomless: “And blessed is he whosoever shall not be offended in me.”

There is only one place we can receive, not an answer to our questions, but peace — that place is Calvary. An hour at the foot of the Cross steadies the soul as nothing else can. “O Christ beloved, Thy Calvary stills all our questions.” Love that loves like that can be trusted about this.

Trust in the Lord with all your heart, and do not lean on your own understanding. In all your ways acknowledge him, and he will make straight your paths (Proverbs 3:5-6).

I love Ron Hamilton’s song, “Abba Father” (lyrics here). It tenderly ministered to me after transverse myelitis, especially the line, “Help me when I can’t see Your will is best for me.”

34 thoughts on “Why Doesn’t God Explain?”