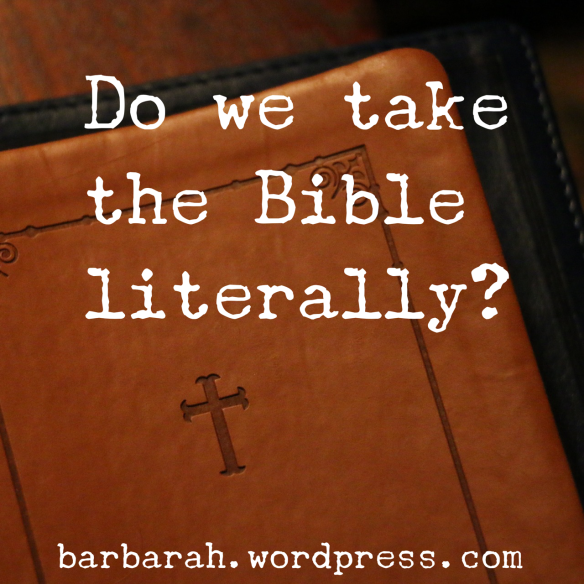 Some years ago I read something scoffing at Christians for taking the Bible literally. One example the author used was the Bible’s speaking of the sun rising and setting, because of course we know that the Earth revolves around the sun: the sun itself doesn’t rise and set. Yet meteorologists use the terms sunrise and sunset every day. We understand in the English language what those terms mean while not taking them literally.

Taking the Bible literally means we don’t interpret it as myth or stories, even though it contains a few stories in it. But we understand the Bible uses different expressions of literature which are not strictly literal without detracting from an overall literal approach to the Bible. What are some of these literary devices?

Idioms. Terms like sunrise and sunset, as mentioned, or phrases like “kick the bucket,”  a somewhat slangish euphemism for dying. Making a “bucket list” capitalizes on that idiom to mean having a list of things one wants to experience or accomplish before dying. On a side note, I was amused recently to see someone take that a step further in an article on “my bucket list for the summer,” apparently not knowing the significance of the bucket in that phrase.

A couple of Biblical idioms:

Metaphors. A simile compares two things using the phrase “like” or “as”: “Her smile is as bright as a summer day.” A metaphor does the same thing but without “like” or “as.” In Shakespeare’s As You Like It, we have this famous metaphor: “All the world’s a stage, And all the men and women merely players.”

A few Biblical metaphors: ‘Behold, you are beautiful; your eyes are doves” (Song of Solomon 1:15b. “You are the salt of the earth (Matthew 5:13a).

Anthropomorphism attributes human characteristics to something not human. “The flower lifted it face to the sun.” “The wind roared.”

Biblical examples: “For you shall go out in joy and be led forth in peace; the mountains and the hills before you shall break forth into singing, and all the trees of the field shall clap their hands” (Isaiah 55:12). The Bible says that “God is a spirit” (John 4:24) and as such does not have body parts as we know them. Yet to communicate with us in ways we can understand, the Bible speaks as if He does. “ And the Egyptians shall know that I am the Lord, when I stretch forth mine hand upon Egypt, and bring out the children of Israel from among them” (Exodus 7:5). Psalm 17:6 says, “I call upon you, for you will answer me, O God; incline your ear to me; hear my words.” Deuteronomy 33:27 says, “The eternal God is your dwelling place, and underneath are the everlasting arms.” We understand that to mean that God’s care is just as real as if He were literally holding us in his arms.

Personification is closely related to anthropomorphism, meaning to treat something abstract or inanimate as if it was human. One of Emily Dickinson’s poems personifies death: “Because I could not stop for Death,/He kindly stopped for me;/The carriage held but just ourselves/And Immortality.”

Biblical example: “Wisdom cries aloud in the street, in the markets she raises her voice; at the head of the noisy streets she cries out; at the entrance of the city gates she speaks: “How long, O simple ones, will you love being simple? How long will scoffers delight in their scoffing and fools hate knowledge? If you turn at my reproof, behold, I will pour out my spirit to you; I will make my words known to you” (Proverbs 1:20-23).

Hyperbole exaggerates something for effect. “I’m so hungry I could eat a horse.”

Biblical examples: “You blind guides, straining out a gnat and swallowing a camel!” (Matthew 23:24). “The cities are great and fortified up to heaven” (Deuteronomy 1:28b).

Poetry uses many of these devices, but poetry itself is often phrased in a non-literal way. To quote Emily Dickinson again:

Hope is the thing with feathers
That perches in the soul,
And sings the tune without the words,
And never stops at all.

Biblical examples: “You yourselves have seen what I did to the Egyptians, and how I bore you on eagles’ wings and brought you to myself” (Exodus 19:4). God didn’t actual send in giant birds, a la The Lord of the Rings, but His care of them was just as if He did. “If I take the wings of the morning and dwell in the uttermost parts of the sea, even there your hand shall lead me, and your right hand shall hold me” (Psalm 139:9-10).

Parables are very short stories with a moral or religious meaning, like “The Boy Who Cried Wolf.” They differ from fables in that they have human characters and are plausible, whereas fables use animals, sometimes inanimate objects or nature, and are usually obviously fanciful.

In the Bible, Jesus’s teaching abounds with parables: the prodigal son, the lost sheep, the sower, the good Samaritan, etc. But there are parables in other parts of the Bible as well, especially among the prophets, like the one Nathan told that convicted David of his sin with Bathsheba.

Symbols involve an item being used to represent something else, like a newscaster referring to the White House and meaning the government: “The White House issued a statement today…”

Revelation is full of symbols. The dragon and the beast, for instance, are not animals but evil people whose characters are represented by those beings. There has been argument over the elements of communion, or the Lord’s supper, or the Lord’s table, for years, but it makes the most sense to believe that the elements of bread and wine are symbolic rather than actually containing the body and blood of Christ. One indication of this is the reaction of the disciples as they listened. They were not above questioning and even arguing with the Lord, but no one batted an eye at His statements at the last Supper, indicating that they didn’t think He was advocating cannibalism.

When we listen to the news, read nonfiction, or hear a speech, we can easily discern these literary devices, and we don’t dismiss everything else the speaker or writer says as symbolic or untrue because they use anthropomorphism or an idiom or a metaphor. We’re able to discern from the context whether certain phrases are literal or figurative, usually without even thinking about it, and we get the message the communicator is trying to convey.

I, for one, am glad the Bible uses different literary genres of devices rather than just giving us lists of facts and truths and teachings. Many of us “get” truth in different ways – some prefer it plainspoken, some benefit from a story or illustration. Hearing the same truth in the law, in a parable, in poetry, in prophecy, in an epistle, reinforces that truth to us.

The Bible uses these devices, but the Bible is not wholly a story or parable or fable. There are some who interpret the first two chapters of Genesis or all of Genesis or even the greater part of the Old Testament as myth. But much of the OT is literal history.

The better way to read the Bible is in an ordinary way like you would any other nonfiction, taking it as meaning what the words would ordinarily mean unless the context indicates it is figurative speech. For instance, there is nothing in the Genesis 1 and 2 accounts of creation that indicate anything is meant other than normal 24 hour days. Sure, Peter says “with the Lord one day is as a thousand years, and a thousand years as one day,” but that doesn’t mean every time you see the word “day” in the Bible that it could possibly mean 1,000 years.The ordinary reading of this passage would indicate that creation took place in the span of a week. That’s certainly not beyond God’s power to do. Good people differ on this, and I don’t think anyone’s salvation hinges on whether they think the days in Gen. 1 and 2 are 24-hour days or eons. But I have read accounts where this is taken as mythic or symbolic that then skew other parts of the Bible to mean something quite different from what a more literal reading would indicate. Though good people can differ here and there on some of the fine points, overall a literal approach (except where obviously figurative) is the best.

There is much more that could be said about this, but I am way past the time I allowed for this post, and it’s plenty long already.

8 thoughts on “Reading the Bible Literally”