I thought I’d show you the cards I made for this last Father’s Day.

This was for my step-father, adapted from an idea seen on Pinterest.

I love that it’s simple but still makes for a nice design. The buttons were made on the Cricut machine. I toyed with using real buttons and thread, but I was afraid they might fall off in transit.

This was for my son. My grandson likes super-heroes, so I thought it was fitting for a super-dad. 🙂

This was from one of the Cricut Design Space’s “Make It and Take It” cards, but I tweaked it a bit from what they had – they didn’t have the “Super” at the top, and their whole card was the size of the blue frame.

For my husband, I wanted something to do with grilling, so I searched the Cricut Design Space’s files for “grill.” Both this grill and the little man showed up, so I used both of them. The design kind of evolved as I worked. I cut little snippets with scissors in the “grass” so it would look like grass blades. I started to stick the figures in the grass, but we grill on our patio, so I used the textured-looking grey paper for the patio. I was going to put “Well done” at the top (a play on the idea of well-done food and well-done fathering), then decided I would put that in a cloud. I had everything centered in the middle but thought the cloud looked odd centered right over the figures as if it was about to rain on them. So I moved it to the side and added another for balance, cutting them both out freehand (I had typed the “Well Done” and printed it on cardstock, along with the inside sentiments of the cards). Then the bottom corners looked like they needed something, so I looked up flowerpots. This flower design actually had a couple of other layers on the flowers and leaves, but they were so tiny they didn’t come out well. I decided the flowers looked ok as is. 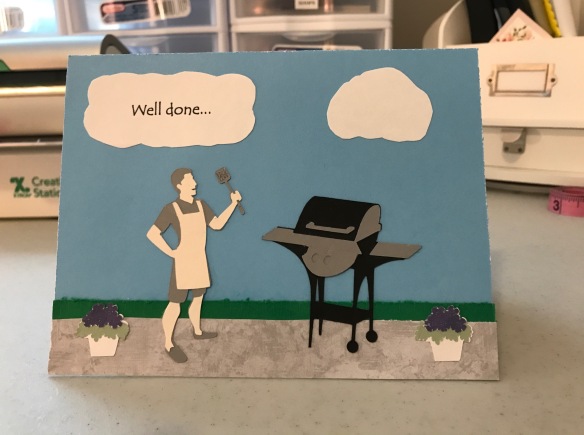 That was it for this time. I think everyone liked their cards. 🙂

(Sharing with Made By You Monday)