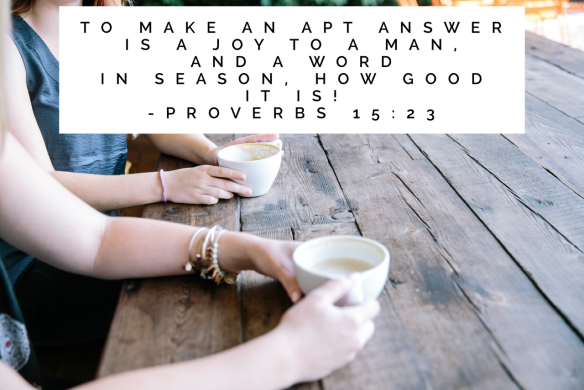 What does mentoring mean to someone desiring to be mentored? Sometimes women have a specific area where they feel they need help. Some just want to have an older go-to person to ask questions.

Dictionary.com defines mentor as “a wise and trusted counselor or teacher; an influential senior sponsor or supporter.” But how do people work mentoring out into real life? Classes? Regular meetings? Shadowing?

The word “mentor” is not in the Bible—at least, not in the KJV or ESV. Probably the closest the Bible comes to the concept is discipling. The classic passage for women disciplining women is Titus 2: 3-5:

Older women likewise are to be reverent in behavior, not slanderers or slaves to much wine. They are to teach what is good, and so train the young women to love their husbands and children, to be self-controlled, pure, working at home, kind, and submissive to their own husbands, that the word of God may not be reviled.

It’s always important to look at the context of a Bible passage, and the context here is teaching and relating life to sound doctrine (verse 1). Then the character of a teacher or mentor is addressed. Several translations describe this older woman as reverent; others use the word holy. She’s trustworthy: she doesn’t spread gossip. Your secrets are safe with her. And she’s self-controlled, not given to excess.

I’ve written before about different ways to mentor. And I shared that mentoring is more than affirmation and suggested thoughts for both mentor and mentee.

What I’d like to suggest now is that mentoring doesn’t have to be a formal arrangement. You may have one person that you go to with every question and concern. That’s fine if you have such a person. But I have found that God has sent different women across my path with just a word in season that I needed at the moment. I’d like to tell you about a few of them.

Mr. and Mrs. B. were the pastor and wife we were under in our college days and then our first few married years. They were an older couple. Mrs. B. was kind, warm, wise. But she also laid things on the line. When I was struggling with some issue and finally ready to do whatever it took to deal with it, Mrs. B. was the person I would go to. I knew she would give it to me straight, yet kindly.

Mrs. C. was a lady whose family came to our church while I was away at college. When I came home for the summer, the family invited me over for dinner several times. They soon became a second family to me. I don’t remember Mrs. C. ever specifically trying to teach me anything, but I learned so much from her example, her character, her response to her husband, her homemaking.

These two relationships were long-term, but sometimes God had an older friend say something helpful in passing. For instance, once while working in the church nursery, another lady mentioned that she had hit the highest emotional highs and the lowest lows in the context of mothering. That stopped me in my tracks, because I had thought something similar, but hadn’t quite put it into words. I don’t think we discussed it any further, but her comment let me know that my feelings were normal. Another time, I was putting up a church bulletin board with a lady who had teenagers while my children were younger. She gave me some off-the-cuff advice not to dread the teen years. She said teens don’t all go through rebellious phases, and if the relationship has been good all along, there’s no reason it can’t continue to be good. That lifted a weight and gave me a healthy perspective of my children’s upcoming teen years, and I’ll be forever grateful.

Once I was doing something in the church building while the group who ministered to the seniors at church were setting up a banquet for them. That kind of preparation can get hectic. The wife of the couple involved, a very sweet woman, came into the kitchen to look for something. While she stood there a moment, gathering her thoughts and looking at cabinets, her husband came in behind her with an urgent question. He couldn’t see her face, but I saw her close her eyes a moment and then give him a calm answer. Whether she was thinking through the answer to his question or changing gears from her own pursuit, I don’t know. But my impression was that in a moment of being overwhelmed, she took just a beat or two to gain control and answer kindly when she might have wanted to be left alone to finish her own task.

Another older lady had to retire from her loved job due to what some considered unfair circumstances. I know this woman was hurt, but I never once heard her badmouth her employers. I watched as she sought out several different new ways of ministering until she found her new niche, and her efforts continued to make a different in other people’s lives.

The one factor all of these examples have in common is that they arose naturally, in the normal course of life and ministry.

There’s nothing wrong with setting up classes and seminars. I have learned boatloads from many great and mostly unknown women teachers. I’ve sought specific counsel from older women at times.

There’s nothing wrong with a formal one-on-one relationship specifically for the purpose of mentoring.

But a mentor does not have to be a formal teacher and may not have that kind of relationship with anyone. Even if she does, we’re all called to the kind of walk where our example teaches and where we’re so yielded to and in tune with the Holy Spirit that He can work though us in the course of everyday life. I think of this as organic, natural mentoring. I don’t remember in any of these cases praying for God to send an older, godly woman my way. But He did, because He knew I needed them.

It’s fine to pray for a mentor, to work through a book or Bible study together, to have a list of questions to discuss. Sue Donaldson has some great ones here. But I also saw a list of 100 questions to ask of a mentor. Honestly, that sounds exhausting. No one wants to feel interrogated. If you want to approach someone with questions, I wouldn’t bring that many. And I’d suggest questions from your own heart rather than a list, things you would like to ask an older, experienced lady about living the Christian life in a way that honors the Lord.

But beyond questions, we can learn much just by spending time with these women and observing their walk and demeanor. I know I have probably asked older women specific questions, but I don’t remember most of those conversations. For some reason, I’ve remembered these instances I shared here for years. Many of them were foundational or transitional to my thinking. And the women in question probably didn’t even know they had said something that affected me. I don’t think I knew it myself at the moment. It probably took time to process their advice, comments, or example. A guest preacher at our church years ago once said that often, when the Holy Spirit uses us, we’re unaware of it.

That’s the kind of godly, older-ish woman I want to be: one who walks closely with the Lord, filled with His Spirit and His Word and a love for others, available for His use in everyday life and conversation.

Have you had such a mentor in your life—someone who wasn’t officially a teacher, yet taught you by word or example? I’d love to hear about them in the comments.