Quilly has started a once a month Quilldancing Writing Assignment. She gives a prompt and we come up with a story based on it in 500 words or less.

I’ve had to sit out the last couple of months. My first attempt back in January was way over the word limit, and even with cutting out over 200 words, it was still over the word count. This one is a bit under — I had started it a while back and then forgot about it, so I hadn’t developed it any further until this morning. But I like it as is, so I think I am going to pronounce last time’s overage and this one’s lower count as balanced. 🙂 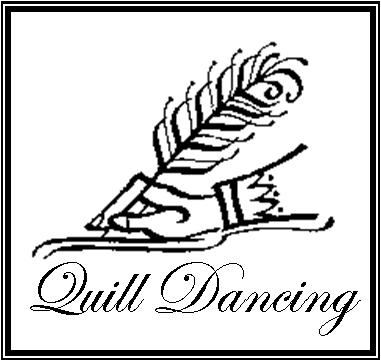 The prompt for today is:

As we all know, “April showers bring May flowers”. This month’s story should include a sudden rain fall and a recalcitrant umbrella. And, since this is National Poetry Month, your story should include a bit of poetry. You can write it yourself or use somebody else’s (be sure to give credit where credit is due); it can rhyme or not; as you wish. See you on the 15th!

Susan awoke with a start and looked with bleary eyes at her alarm clock. “Oh, no! That thing failed to go off again!” She needed a more reliable clock, but no time to think about that now: she flew into high gear trying to get ready for work.

Along the way, a series of small calamities multiplied her frustrations. The blouse she wanted to wear had a spot on it. In her haste making breakfast her sausage biscuit wasn’t quite warm enough before she had to wolf it down on the go. A train crossing the street out of her neighborhood delayed her even more. She couldn’t miss her boss’s scowl as she scurried to her place. She discovered they were shorthanded, and she ended up having to work through her lunch hour. Her customers seemed particularly demanding and impatient. 5:00 could not come soon enough.

When she finally clocked out, she dashed over to the electronics store to find a new alarm clock. Purchase in hand, she exited the store to discover the clouds that had been threatening all day had finally erupted into a sudden storm. As she unfolded her umbrella, she commented to herself, “I’m glad I brought this thing. At least something went right today.” She had had to park her car quite a ways away, and less than halfway there a gust of wind blew her umbrella inside out.  Cradling her purchase in her elbow, she tried to reach the mechanism on her umbrella to close it while simultaneously trying to jiggle the thing back into its proper form, all to no avail.

Soaked from her struggles, she was on the verge of either screaming or crying when she became aware that a shadow had passed over and she wasn’t feeling the rain any more. She looked up to see a large black umbrella over her. She turned around to look up into the face of its owner. Tall. Handsome. Smiling brown eyes. Crooked grin.

“You know how it is with an April day,” he said.

Her wet bangs were plastered to her forehead and dripping into her eyes. “What?”

“You know that old poem by Robert Frost? “ He quoted with a flourish:

The sun was warm but the wind was chill.
You know how it is with an April day
When the sun is out and the wind is still,
You’re one month on in the middle of May.
But if you so much as dare to speak,
A cloud comes over the sunlit arch,
A wind comes off a frozen peak,
And you’re two months back in the middle of March.

She smiled. “Well, that certainly does sound like April.”

He handed her a handkerchief and asked, “Bad day?”

“It’s starting to get better.”

Quilly has started something fun — a once a month Quilldancing Writing Assignment. She gives a prompt and we come up with a story based on it in 500 words or less.

If this were for a grade, I would automatically be marked off. I read the prompt, tucked it away in my mind, had a great idea for it in the shower, and as soon as I could pounded out the story at the computer. But I hadn’t reread the prompt and wrote a story about ice skates instead of roller skates. She said that was okay. Then my original attempt was over 800 words! I whittled it down to 558, and I can’t think any more and it’s “due,” so I’ll go ahead and post it. Hopefully I’ll do better next time. I really enjoyed it, even cutting down the words and tightening up the writing. One of my purposes for starting a blog was to work on my writing, and I don’t often write fiction, so this was a great exercise. Thanks, Quilly! The stories for this prompt are all here.

You received a set of clunky, old-fashioned roller skates from the oldest, most eccentric member of your family. The skates appear to be too small, so you try to return them. S/he insists you try them on. You decide to humor him/her. To your amazement the skates fit. Suddenly you are overcome with the urge to skate and … (tell us what happens next in 500 words or less).

As Gran looked on excitedly, Jenny opened the Christmas present she had been savoring for last. The small box held — child-sized ice skates. She looked at Gran, confused.

“Those are your magic skates, honey. Put them on!” Gran exclaimed.

“Nonsense! They’re magic! Put them on.”

Gran wasn’t senile, but she didn’t always make sense. So Jenny tried to put them on to humor her or else show her that they really were too small. But as she slid her foot in — they did fit! Perfectly!

“Let’s go to the pond, Honey. I want to see you glide like a swan.”

Jenny didn’t understand, but she followed Gran to the pond. She wobbled on the ice and then found her footing. How exhilarating to sail across the pond!

Jenny was skating as if she had done so all her life — spins, jumps, everything came naturally. As much as she liked the thrill of the jumps, what she loved most was just…gliding. Especially in a circle, leaning slightly back, arms outstretched. She could glide for hours.

But then she became aware of something beeping in the distance. She slowed and saw through fog a red light flashing in time to the incessant beeping  Had someone lost a cell phone?

She skated closer, the mist cleared, and she saw…not a cell phone, but an IV machine. Suddenly aware of dormant pain that now threatened to take over, she blinked: she was not on the pond but in a hospital bed, and memories crashed over her like waves….the accident, a broken ankle, ribs,  a fractured vertebra. She became aware of Gran’s voice..

“I’m so sorry, honey, that IV ran out before they changed it. I’ve been calling for the nurse.”

Just then a nurse bustled in to change the IV bag. She made small talk without really listening for an answer: “How are you today? I’m sorry about the bag — it’s been so busy. You’ll be feeling better in a few minutes. Such a shame, and so close to the Olympics.”

Jenny’s eyelids squeezed shut lest she cry in front of this stranger. The Olympics. She’d forgotten for just a few blissful moments that her dreams were as shattered as her bones.

As the medicine took effect, Jenny relaxed. Gran whispered, “Before the IV ran out, you had such a peaceful smile on your face.”

“I dreamed you’d given me magic skates. I was gliding on the pond.”

Gran smiled. “That’s what you called the first skates I ever gave you. You took to skating like a swan takes to water. I can’t wait to see you back on the ice.”

“But Gran…I’ll only be able to glide in my dreams.”

“Dreams are nice to visit, but real life dreams take effort, sweat, and time. You do everything these doctors tell you, and you keep hope alive, young lady.”

“Yes, Ma’am.” Gran was right. Jenny knew she wouldn’t skate if she never tried. It would be as hard…no, harder than training for the Olympics. But she would try.

As she drifted to sleep, she noticed her first child-sized skates hung on her IV pole. Jenny smiled. She would hope, dream..glide.