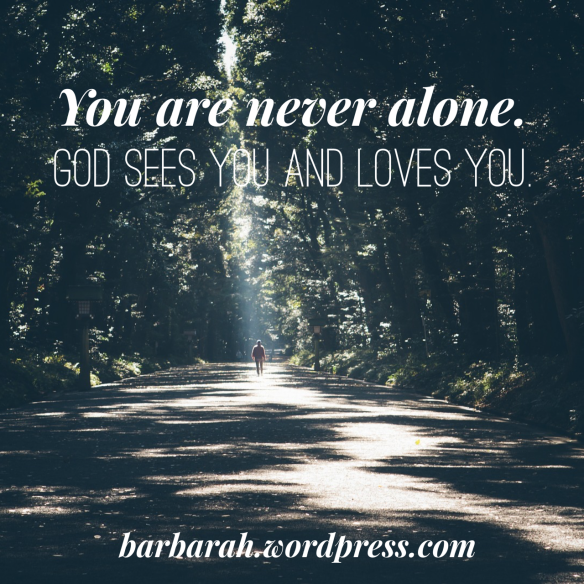 Many years ago, our former pastor preached a series of messages about Jesus’s 12 disciples. Several concentrated on Peter, naturally: he’s the one who is mentioned most often in the gospels and Acts and who also wrote two books himself. James and John, with Peter, made up the closest inner circle. We have memorable and telling scenes in the gospels with Matthew (aka Levi), Nathanael (also called Bartholomew), Philip, Andrew, and Thomas. And, of course, much could be observed about Judas. But there are several about whom we know little except their names and the fact that they were chosen of Jesus and were there in all the situations that involved the twelve.

My pastor pointed out that one lesson we can learn from them is faithfulness in obscurity. Their names might not be the ones everyone remembers: in fact, theirs might be the hardest to come up with in a trivia challenge. But they had their purposes and their duties.

Sometimes God has us “in the background” for a season. I’ve just been reading the first few chapters of 1 Samuel was was struck by how often it’s said that “Samuel was ministering before the Lord” or “Samuel continued to grow both in stature and in favor with the Lord and also with man” in contrast with Eli’s wicked sons. His time of more public ministry came later, and I’m sure he had no idea how far-reaching it would be. But he faithfully served God whether in the background or the limelight. Paul spent three years in Arabia, a section of his life we know little about, before becoming well-known.

Sometimes we’re in obscurity because our mission is to be the help and support behind the one out in front. Perhaps you’ve heard mention of Mr. Edward D. Kimball, perhaps not, but he is the Sunday School teacher who led D. L. Moody to the Lord. From what I have read of him, he faithfully served in that capacity for years, and his ministry in the life of each of his students is as valuable as the one that resulted in a world-famous evangelist. John Newton’s mother was only able to influence her son for Christ for under seven years before she died. But God took the seed sown, watered it, and brought it to fruition years later. I read once where C. H. Spurgeon credited much of the success of his ministry to those who prayed for him behind the scenes.

Some experience a time of seeming obscurity after a wide and public ministry. Philip experienced quite a successful ministry in the city of Samaria, but he was just as faithful and just as useful when called to speak to one man on a desert road. Amy Carmichael had a very busy ministry in India when an accident left her an invalid for the last several years of her life. She might have felt more obscure and less useful, but God used her writings after that time to influence multitudes for years to come. Paul, as well, might have felt pretty obscure in a Roman prison after years of missionary journeys and preaching to crowds, but what we know as the prison epistles were born in that scenario. As Elisabeth Elliot said, our limitations don’t hinder our ministry: they define our ministry.

But probably the great majority of us are like those few disciples in the background. Our name isn’t meant for the spotlight. Maybe we couldn’t handle it. Maybe that’s just not where God wants us to be. People might not ever see or know what we do. But God does. Faithfulness to Him and whatever ministry He has called us to are what matters.

Though this isn’t a post primarily about blogging, some years ago a blogging friend wrote of something that has stayed with me all these years. She was struggling with the desire for more readers. But God helped her with the concept of “feeding those at the table”: being faithful to those who were within her reach and trusting Him with the size of the audience.

In what we call “the parable of the talents,” different people were given different amounts of the master’s money to steward. We’re not told why different ones had different amounts. But the person with only three wasn’t to covet the ten given to another: he was to faithfully invest what was entrusted to him.

It’s not necessarily wrong to seek a wider audience, especially when we’re trying to convey truth and encouragement. And it’s wrong to avoid a larger sphere of ministry if that’s what God is calling us to. But we’re to be faithful whether we’re ministering to few or many, whether our opportunities are wide or seemingly narrow. What matters is doing whatever we do as unto Him, and “thy Father which seeth in secret himself shall reward thee openly” (Matthew 6:4, 6).