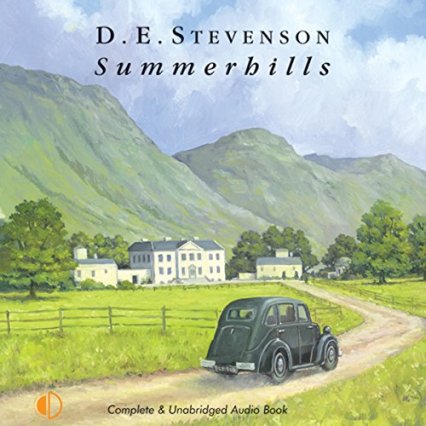 Summerhills is the sequel to Amberwell by D. E. Stevenson. This book focuses primarily on three of the adult Ayrton children.

Roger is the oldest and the heir since his father died. But he assured his four siblings that Amberwell would always be the family home and they would always be welcome. In the last book, his wife had died in the London bombings, leaving him with their infant son, who nearly died as well. Since Roger was in the military, he sent his son, Stephen, home to Amberwell to be taken care of by his sister, Nell. In this book, Stephen is approaching the age to go to boarding school. But Nell can’t stand the thought of Stephen being sent away. Roger had inherited his wife’s fortune and had been pondering the best way to use it. Now he decides perhaps opening a boarding school nearby would help others as well as himself and Stephen. Summerhills is the name of the new school, and almost all of Roger’s time on leave is spent preparing for the school: consulting with a builder, finding a headmaster, etc. Roger had no interest in other women. He felt his wife was the only woman he would ever love. But perhaps becoming reacquainted with a childhood friend will reawaken the part of his heart that he thought was closed.

Nell had kept Amberwell afloat all during the war. With the loss of most of the staff during the war, Nell continues all of the tasks involved in attending to Amberwell while also caring for her nephew and her confused mother. Nell had always been the shyest Ayrton, content to be at home. When her brother Tom’s friend, Dennis, comes to visit, he is drawn to her. But he knows he will have to win her slowly, through friendship, before he can share his heart.

Ann had been missing from a large part of the last book after her aunt more or less pushed her into marrying a man that her parents would not have approved of. In time, this man proved abusive and eventually died. Ann did her best to provide for her young daughter on her own until the rector of their village found her and urged her to come home. Now she keeps house for the rector. The new headmaster is an old friend, and Ann senses he would like for their relationship to develop into something more. But marriage has been ruined for her.

Tom, the other brother, is away at sea throughout the book but is mentioned. Connie, the oldest sister, had been married and had three children in the last book, and had gotten hold of a book advising against thwarting or correcting children. Consequently, her children are rude, uncontrolled little monsters.

There are comic scenes, often involving Connie’s children, a pretty young governess, and the banter between Nanny and Mrs. Duff, the cook. There’s not a great deal to the plot besides getting the school ready and the various romances. But it’s a sweet, cozy book with some touching moments.

A couple of characters’ fates were left up in the air. There is no other sequel, but, according the this site, some from Amberwell make an appearance in a later book, Still Glides the Stream.

Objectionable elements: a few “damns” and mentions of blacks and Chinese that would be considered racist today. Though I don’t condone such references, I wouldn’t avoid a book with them any more than I would avoid any book where the characters do something wrong in some way.

I listened to the audiobook, wonderfully read by the same reader who narrated Amberwell, Leslie Mackie. 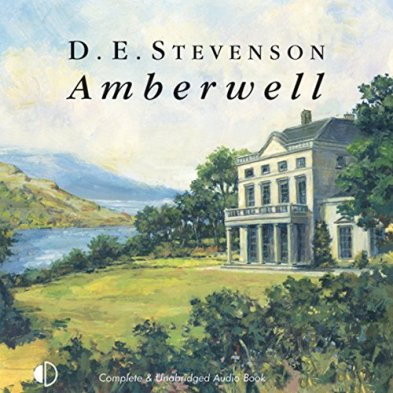 I had not heard of D. E. Stevenson until a few years ago. I’ve seen her name mentioned favorably, but had never felt inclined to check our her books. But then Hope‘s mention of Amberwell led me to try it.

Amberwell is the name of the house owned by multiple descendants of the Ayrton family in Scotland. The residents in this book have five children, two boys from a previous marriage and three girls. The parents are aloof, authoritarian, and imperious. The children are kept in the nursery much longer than usual, and the parents don’t attempt to get to know them well.

But the children are allowed to roam free on the estate, and spend most of their time outdoors playing all sorts of imaginative games.

The next section of the story jumps ahead ten years. The two boys are in the service during WWII. One daughter has married, one’s whereabouts are unknown, and one is left to keep things together on the home front. Each faces their own struggles and heartaches.

Amberwell falls into disrepair due to shortages of supplies and manpower. But it draws each of the children back like a beacon.

It took me two or three chapters to get into the story, but once I did, I loved it. The last third or so of the book, I wanted to set everything else aside and just read.

At first I wondered if this was a children’s book, not only because the children were the main characters, but also because the writing seemed simple. But by the next section, the writing and the plot shifted into a higher gear.

There was one odd place where one of the girls witnessed something untoward from their father, but nothing was ever said about it again.

I listened to the audiobook read exceptionally well by Leslie Mackie. She has a lovely, soft Scottish accent but could bring out the brogue with some characters. That’s one advantage to audiobooks: I don’t usually think in the accent of the characters when I’m reading, unless the dialect is written well. But hearing a whole book set in Scotland with a Scottish accent really added to the enjoyment.

I’m delighted to have discovered D. E. Stevenson, and now I have a whole list of her books to explore. In fact, I’ve already started on the sequel to Amberwell, Summerhills.

I’m counting this book for the Back to the Classics Reading Challenge under the Classic About a Family category.