The preface of Unbroken by Laura Hillenbrand tells of three men in a raft in the Pacific Ocean. Their plane had crashed, the rest of the crew was dead, they’d been on the raft for 27 days. Finally they rejoiced to hear a plane. They shot flares into the sky and put dye in the water to make their raft more visible. But then the plane started shooting at them: it was Japanese, not American. One of the men jumped into the water, but the sharks came toward him…

And then the author cuts away to the childhood of Louis Zamperini, one of the men in the boat. He had been on the fast track to becoming a juvenile delinquent until his brother intervened for him with the high school principal who had banned Louis from participating in sports as a punishment. The principal relented and allowed Louis to run track, where Louis found focus and purpose.

Louis did so well, in fact, that he ran in the 1936 Olympics in Berlin and was expected to be the first man to break the four-minute mile. His dream of the 1940 Olympics was shattered when they were cancelled due to WWII.

Louis joined the Army Air Force and became a second lieutenant and a bombardier. On one harrowing mission, his plane was ravaged by over 500 bullet holes, yet made it safely back to base.

But on one May day in 1943, their plane crashed into the Pacific, killing the other eight crewman. Louis and the other two survivors stayed afloat for 27 days until the event described in the preface occurred.

I had thought that would be the climax of the story, but it was just the beginning of Louis’s troubles. The crew was eventually captured by the Japanese and taken to a place off the grid from the other POW camps. It was not registered with the Red Cross, no one knew about it, the men were given up for dead, and ultimately the Japanese could do what they wanted with the prisoners with no fear of consequences.

When we think of WWII we often think of the atrocities of the Nazis, but the Japanese were uncommonly cruel. Hillenbrand explains that their concept of “saving face” makes surrender the ultimate humiliation, and the soldiers’ surrender to them gave them license, they felt, to degrade them in any way that came to mind.

At several points in Louis’s story, I thought, “How much more can one man endure?” He must have wondered the same thing at times.

Even after he returned home, his troubles did not end as he was afflicted with post-traumatic stress syndrome, severe nightmares, and succumbed to alcoholism.

But the subtitle to Unbroken is “A World War II Story of Survival, Resilience, and Redemption.” Louis’s survival, resilience, and redemption make for an exceptionally touching and inspiring book.

The story is told primarily through narrative, with very little dialogue, but it is captivating. I listened to it via audiobook, and Edward Herrman did an excellent job narrating.

There are those who would want to be forewarned that there is a smattering of bad language in it, understandable in the context, including one particularity vulgar word that could have been left out. But other than that, this is an excellent book.

A movie is being made of Louis’s life, and I hope they won’t leave out the faith element. After Louis got back to the USA, his troubles weren’t over, but God used them to lead him to Himself.

(Reposted from the archives) 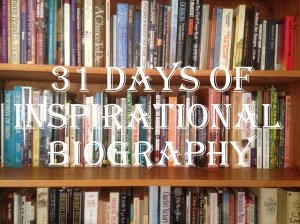 For the 31 Days writing challenge, I am sharing 31 Days of Inspirational Biography. You can find others in the series here.

Here is my semi-weekly round-up of interesting reads – I hope you’ll find one or two of interest:

A Return to the Book. “The further I move from the written Word of God, the less confidence I can have that I’ve heard a word from God. ”

The Danger of Coasting. When we’re not living intentionally, we usually end up somewhere we didn’t mean to go.

Flip or Flop. People can say and do horrible things – like in an earlier post by this author where people commented, “Your poor husband – 6 kids and wife in a wheelchair” or tell her that her children will grow up to resent her disability. But in this post she discusses the good things people have said and done and the choice we can make in which to focus on.

5 Ways Moms Create Cranky Toddlers. Written by a mom and shared by a young mom friend.

Seven Ways to Love Your Pastor.

Why I Read Heartwrenching Stories. I haven’t read the book discussed here but I like what she said about why she reads books that deal with topics that are hard to read about.

Louis Zamperini, the subject of the book Unbroken by Lauren Hillenbrand (one of the best I’ve ever read) passed away this week at the age of 97. An Olympic athlete, WWII soldier, and POW, his greatest victory came through faith in Christ. Here are a couple of short news videos about his life and death, neither of which mentions his faith: let’s hope the upcoming film based on the book does: